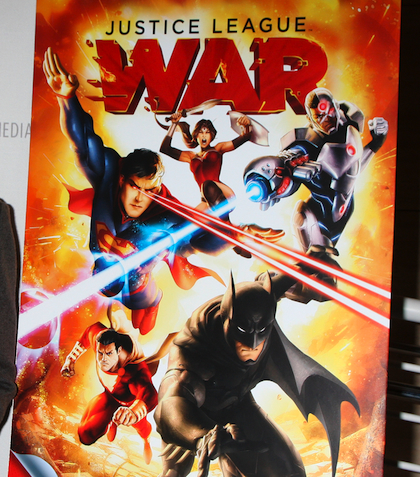 If I could please have all of Hollywood’s attention, I’d like to talk about your plans for making a Justice League movie. You should listen too, DC Comics.

With the success of The Dark Knight series, The Avengers, and Man of Steel, the time does indeed seem ripe to bring together such popular comic book figures as Green Lantern and The Atom. I guess if they want to be ambitious, they could throw Superman and Batman into the mix as well, but I honestly don’t think anyone would miss them. In all seriousness, though, a Justice League movie is something that comic book fans have been dreaming about for years. Well, I think that the best thing to do is to not over-think it. Just dive right on in. What could go wrong?

Well, maybe diving right in is not such a good idea. And, to be perfectly honest, I’m not so sure that a Justice League movie is a good idea at this point. Marvel played it incredibly smart and released a series of movies that led up to the awesomeness known as The Avengers. There was careful planning involved and they knew what they were doing every step of the way.

The point is that Marvel took the time to set up a fun and adventurous world where all of these heroes existed. DC has yet to do that with Superman and Batman. Oh, I know that if you look really closely you can see “Wayne Enterprises” written on a satellite in Man of Steel, but I’m afraid that is not going to cut the mustard. While Man of Steel might be one of the puzzle pieces that will ultimately lead to a Justice League movie, I can assure you that none of the Dark Knight movies were made for that purpose. Christopher Nolan took Batman and placed him in a fairly realistic world. Any fantastical elements that existed were given realistic and down-to-earth explanations or were changed so that they could be more believable. Nolan’s version of Batman takes place in a dark and gritty reality with no room for silliness.

Man of Steel has a slightly lighter tone than the Dark Knight movies, but it’s still the grimmest incarnation of Superman that we’ve seen yet. So, my question is, if we do get a Justice League movie with Nolan’s Batman and Zach Snyder’s Superman, will it be any fun? The Avengers certainly had some serious moments, but it managed to blend those together with plenty of fun and excitement. When Catwoman shot Bane and Batman shot Talia, I wasn’t having fun. When Superman destroyed half of Metropolis and didn’t even bother to try to save one single person out of the millions that were hurt during the fracas, I wasn’t having fun either.

So, what is the solution? Well, for what it’s worth, I do have a suggestion to offer the beautiful folks at DC and the bigwigs in Hollywood: Start over. We live in a world filled with reboots, and two more aren’t going to make much of a difference. Recreate Batman and Superman and treat the projects as serious efforts, but don’t forget to have some damn fun. When we do get a Justice League movie, I want it to have more going for it than a depressed Superman staring at a depressed Batman.

There is nothing wrong with making a superhero movie dark and realistic, but today it seems like that’s what everyone expects a superhero movie to be. Thankfully, movies like Iron Man, Thor, and The Avengers came along and reminded us that movies about extraordinary people with extraordinary powers could be enjoyable and fun but still well made. Now, that being said, I liked Batman Begins and The Dark Knight and I enjoyed most of Man of Steel. All I’m trying to say is, a successful superhero movie is not just dependent on how dark and real it can be. The Justice League cannot exist in the worlds set up by Nolan and Snyder, nor should it. The film should embrace the myths and magic that made the comic books successful over the years. The coming together of so many awesome heros shouldn’t be a heart wrenching experience, but one of joy. Certainly the film should be treated as a serious effort, but not so serious that it forgets to be fun and enjoyable.