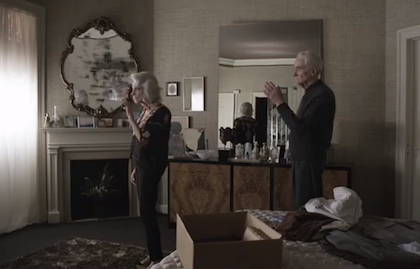 Love stories as fodder for music videos are a dime a dozen, more often than not a thinly-veiled reflection of the artist’s own romantic travails. Justin Timberlake is, historically, no stranger to this tactic, but for his latest clip, he’s taking the personal story in a new direction.

Coinciding with the long-awaited release of his long-awaited new album, The 20/20 Experience, JT has dropped the music video for the second single off the record, “Mirrors”, which features an incredibly moving (though obviously stylized) homage to his own grandparents! “For William and Sadie”, as the clip proclaims in its opening, an elderly couple look back on a lifetime spent together, where they know each other so well and are such a part of the others’ very souls that they are, quite literally, mirrors of each other. Awww.

The video also includes an extended epilogue sequence wherein Justin finds himself in a funhouse of mirrors chasing (or being chased by) an enigmatic female figure. His very own feminine side perhaps? Hmmm, deep, JT!

Check out the music video/mini-short film below!