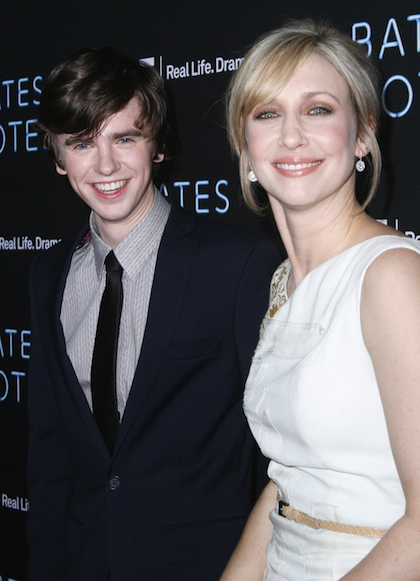 I shall now review A&E’s “Bates Motel” premiere in the style of Stefon from “SNL”:

Okay, okay, all kidding aside, this was definitely one packed pilot! About 70% of the things I mentioned above occurred within just the first 30 minutes of the episode, which of course led me to thinking, “Wow, if all that has already happened, what else can possibly be in store??”

“Bates Motel” did not disappoint, both as a new, exciting drama series and as an homage to Psycho. This thing pulled no punches, and several times I was left feeling a little uncomfortable – but that’s a GOOD thing! Vera Farmiga and Freddie Highmore were both outstanding in their roles as the co-dependant, slightly unstable mother and son. And while much of the original Psycho canon was reworked, I didn’t have a problem with it, because it FELT consistent. Cheeky references to the original source were sprinkled throughout the premiere, such as: the first time we see Mother, she is getting out of the shower; the first(?) murder victim is stored in one of the motel’s bathtubs; during a scene in the kitchen where Norma sends Norman on a guilt trip for wanting to join the school’s track team, she is wearing a rather matronly print dress with her hair pulled back in a bun, creating that silhouette of Mother Bates we’re all so accustomed to (see pic above).

Throughout the episode, little hints were dropped here and there suggesting that Norma & Norman weren’t the only residents of this small Oregon town that might have some sinister secrets… At one point, while tearing up the motel rooms’ carpets (because Norman had spilled blood on it – tsk tsk!), he discovers in the floorboards a tattered diary, featuring crude sketches of what looks like a young girl being tortured. Instead of being horrified or even a little shocked, Norman seems to find some enjoyment in these macabre illustrations. Then, at the very end of the episode, we see some vague shots of a figure (presumably female) chained up and getting a syringe shoved in her arm. Who is behind THIS, we are left to wonder?? Me, I was just left thinking… “Uhhh… don’t really care.” As the season progresses, this might turn out to be my one point of contention. The reason why Psycho worked and why Norman was(is) such a mythic figure in horror cinema is the fact that he was a classic boy-next-door who turned a sleepy, small town upside-down. It was the type of place where everyone knew everybody else, doors were left unlocked, and the Sheriff could get a good night’s sleep. But the town we are presented with in “Bates Motel” seems to be, by all accounts, the perfect place for a couple of psychopaths like Norma and Norman to thrive… because apparently everyone else in the town is kind of loony too! Where’s the fun in that? Psycho was about a mad man lurking in the shadows until he is caught and sent to the asylum; “Bates Motel” basically IS the asylum, which leaves little room for Norma and Norman’s specific sort of isolation. In Psycho, they kept themselves hidden away because no one understood them. But in “Bates Motel”, seems to me that they fit right in! Once Norman's crimes are eventually revealed, this crop of townfolk will probably be hard-pressed to find anything shocking about it.

At any rate, I’m still willing to see how this plays out. The first episode definitely has me thirsting for more!