The New Leading Ladies of Marvel 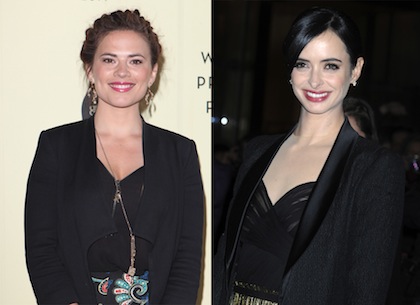 We’ve got Thor, Captain America, The Hulk, Iron Man, Hawkeye, and Black Widow… notice anything here? Yeah, they’re all from the Avengers, but there’s only one lady in the whole group! Like many others, I can't help but feel like we’re missing a huge market in watching ladies kick the colons out of superhuman bad guys. To me, there is nothing sexier than an intelligent woman who can beat down the villain who tied me to the train tracks, and save me before the train runs me over. It’s like everybody forgot “Buffy the Vampire Slayer” was a successful show that did just that. But fear not, folks, because some cool people at Marvel caught up to Joss Whedon’s line of thinking and now see that there is, in fact, a market for strong, smart, determined, highly-skilled, and well-rounded female characters, thus we give you ABC’s “Agent Carter” and Netflix’s “A.K.A. Jessica Jones”.

Ever hear of Peggy Carter? Maybe this will refresh your memory:

Peggy Carter, played by the talented British actress Hayley Atwell, was in her prime around the time Captain America was kicking Nazis and their primitive racial views back to the Stone Age, but then Captain America left the world for over 50 years. What did Peggy do during that time? That’s exactly what ABC's "Agent Carter" wants you to know. Peggy may have been the love interest of Captain America, but when he left, did anybody really think she was going to sit and sulk that her man was gone? Maybe so, if this was written in the actual 1940s. Peggy Carter is a highly trained undercover government agent in the Strategic Scientific Reserve, working alongside Howard Stark (Tony Stark’s father and descendent of the Starks of Winterfell… right?), and she isn’t going to sit around and wait on some dude who took the world’s greatest steroids to come back. Carter has a job to do and a world to save. There’s no time in a schedule like that to wait by the rotary phone all night and sew your way into spinsterhood.

Be sure to check out the two-hour premiere of “Agent Carter” on January 6, 2015. That’s almost two weeks away!

As for “A.K.A. Jessica Jones”, this is an upcoming Netflix series that will act as a companion series to the other upcoming Netflix show, “Daredevil”. “A.K.A. Jessica Jones” will follow the life of former superhero Jessica Jones, played by the beautiful Krysten Ritter, who now works as a private investigator while dealing with Post-Traumatic Stress Disorder from her stint as a superhero. In preparation for the role, Ritter read through the entire Jessica Jones comic book story arc, entitled “Alias”, which, if you read it, could give you a sense of what the show will be like.

The exact premiere date is unknown at this time. We do know that the first season will consist of 13 hour-long episodes, it will be shot in New York City, and production will start when “Daredevil” wraps, which should be very soon. Luke Cage will also appear in “A.K.A. Jessica Jones”, as he will in “Daredevil”, thus linking the two shows together. Prolific comic book and television writer Jeph Loeb will also be executive producing the show.

In lieu of a clip (since, you know, nothing has been shot yet), let's get a little more backstory on who Jessica Jones is -- She won’t be your typical private investigator, because she wasn’t a superhero like Batman was; instead she was a full-blown powerhouse. Jones has the power of flight, super strength, limited vulnerability, psionic protection, and even knows how to pull off plenty of Kung Fu moves. She went to high school with Peter Parker, whom she had a major crush on. Jones was present on the day of that fateful field trip that gave Parker his superpowers. In fact, she finally built up the courage to talk to him during that field trip but was put off by his coldness, since having been bit by a radioactive spider kind of distracted him. (Q: Can you blame the guy? A: Yes. Yes you can.)

In high school, she was named Jessica Campbell, but that changed on the ride home after the spider-bite field trip. Campbell and her family got into a car accident with a military chemical convoy which killed them and landed her in a several month-long coma. When she woke up, she had superpowers and was adopted by a new family, the Joneses. Now the rest of her story is… either pick up the comic books or wait for the series. I have no idea what will be in the series, so why ruin anything for you? Now, get out there and read “Alias” and ruin it for yourself!

Closing thoughts: Thank you, Marvel. Finally, we get multiple television series where women are comic book-killing foes and solving crimes. It’s about time you guys wised up and learned that it’s something we all want to see. Ladies want to see characters they can relate to in comic book-themed shows, and fellas like myself like the idea of a woman coming to save us instead of the other way around. Keep it up, Marvel!