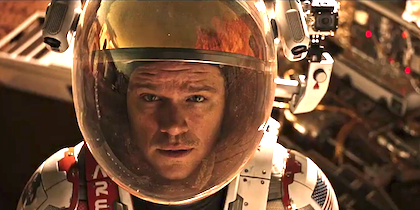 Picture you’re an astronaut with an awesome space career. You’re great at growing plants and knowing other such sciencey things. You’re given a task of being one of the first people to go to Mars and take a look around. That’s when something goes wrong, and suddenly you’re shipwrecked like Tom Hanks in Castaway. The bad news is you’re not Tom Hanks, so you’re chances of survival are already severely lowered. But the good news is that you look in the mirror and you realize you’re Matt Damon. Survival rate just skyrocketed again. What is this that I’m describing to you? The new Ridley Scott sci-thriller, The Martian!

The Martian isn’t due out until November 25, but the trailer for this awesome-looking movie just came out! Watch out for Martians below:

Now you know that the Martian in The Martian is Matt Damon. While Damon may be alone on Mars with no extraterrestrials in sight, he isn’t alone with this stacked co-starring cast. I don’t know about you, but I spot Jessica Chastain, Kate Mara, Kristen Wiig, Donald Glover, and Jeff Daniels. Maybe you saw these two as I didn’t notice them, but Michael Pena and Sean Bean are both listed in the cast as well. (Who wants to make a bet on how Bean dies? Since it's Space, I call suffocation!)

I personally can’t wait for this. Scott is a great director who has made two of my favorite non-Star Wars and non-Star Trek sci-fi movies: Alien and Blade Runner. Let’s see about making it through summer and Halloween into the cosmos of Mars to chill with The Martian!