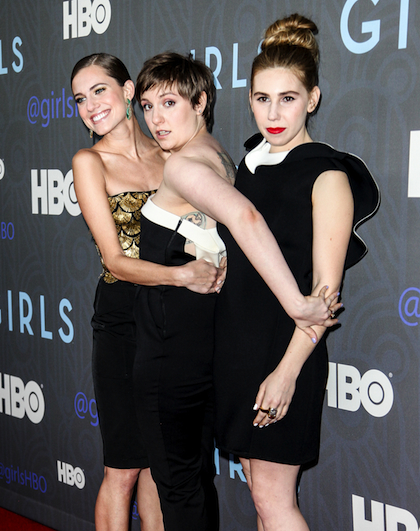 2013 has nearly come to an end. It’s been a whirlwind of a year, what with all the twerking, rebellion, breakups, makeups, babies, and all around love. And what a year it’s been for television! We saw the end of some of our favorite TV sagas as well as the beginning of some fresh comedies and dramas. As a pop culture nerd, I wouldn’t feel complete unless I crafted at least one “best of” list. So, without further ado, here is my “best of” 2013 Television list:

I’m sad to say that one of my favorite television dramas came to an end this year. “Breaking Bad” took the standards of television dramas to a new level, a level that every single drama out there should aspire to hit. The acting was phenonmenal, the writing always kept me on the edge of my seat, and even the cinematography was breathtaking. I was consistently impressed with how literary “Breaking Bad” was; I would even argue that “Breaking Bad” may be the next Great American Novel. If you have never watched “Breaking Bad”, I strongly recommend getting nice and situated on your couch with a cup of warm cocoa and cookies over the holidays. You’re in for one hell of a ride!

I have two words for you: Red. Wedding. “Game of Thrones” was full of even more twists, turns, blood, and terrible decisions than ever before. Beloved characters were brutally murdered. War waged on. But despite all of the casualities, every death was within reason. George R.R. Martin has never taken death lightly; his books are not just full of endless violence. The show, like the books, have a knack for making you feel empathy and sorrow for these characters. When one makes a terrible decision, you want to shake them and cry, “Why?!” When one dies, you’re ready to seek out revenge for them. This careful mix of empathy and violence is rare to find on TV today, and for that I applaud Martin, the writers behind the show, and the actors. Raise your hand if you can’t wait to see what will happen in Season 4!

That cliffhanger ending! Alex and Piper’s kiss! Crazy Eyes! The list of shocking, hilarious, and touching moments during “Orange is the New Black” is endless. I think it’s safe to say that Netflix’s original dramedy was a success. If this show doesn’t get nominated for multiple Emmys, I may boycott the Emmys. Originally based on the memoir by Piper Kerman, “Orange is the New Black” follows Piper Chapman (played by Taylor Schilling, based on Piper Kerman herself) as she enters a minimum security prison for a drug-related charge from years ago. The show (and the book) follow Piper as she interacts with the unconventional women around her, including her roommate, a Miss Claudette Pelage (Michelle Hurst) who isn’t as peaceful as she seems, Crazy Eyes (the brilliant Uzo Abuda) her overager suitor, and even her ex-girlfriend Alex (Laura Prepon). “Orange is the New Black” never makes fun of its characters or even treats them in a harsh light -- this is truly a show about the struggles that women of all shapes and sizes face. I urge you to catch up before Season 2 premieres, and I guarantee that you will laugh, cry, and fall in love with these ladies.

There is something strangely charming about this dysfunctional New England family who own a burger restaurant. The Belchers aren’t exactly like any other animated family on television at the moment. Gene’s one-liners are hilarious yet sound a bit like what an actual oddball 10-year-old boy might say. (One of my favorites: “It’ll make me the it-kid, as in ‘What is it? It’s the kid in the mask!”) Louise might actually be a bonafide psychopath, yet she actually does seem to care about her family. I love Linda’s random bursts of song (especially when it’s with her sister and Gene) and Bob’s resigned loyalty to his family. But there are three real unsung heroes of “Bob’s Burger’s": Tina Belcher, and Louise’s goofy classmates, Andy and Ollie. Tina may be one of the most honest characters ever written. She’s not bratty, pretentious, or even ironic -- she quite literally speaks exactly what is on her mind, and it’s amazing. Whether Tina is upset that she’s not her father’s favorite after he begins to teach her school’s cooking class or meeting her love in the frozen section of a grocery store, Tina is a believable character; she is sincere, and that’s why I love her. Andy and Ollie seem to be on their own planet, and are perfectly voiced by Sarah Silverman and her sister, Laura. The pair can’t really function without the other, and their innocence seems to make them incapable of spotting Louise’s traps. However, like Tina, the two boys are sincere; there is a sense of hope about them that make me happy. And how can you not love lines like this:

I was intrigued by “Girls” from day one, if only just to see Adam Driver parade around without a shirt on. But as the series has gone on, creator and star Lena Dunham has proved that she is not only a talented filmmaker, she is an incredible writer. Every single episode of “Girls” this season felt like a short story I would read in The New Yorker. Although all of the episodes were connected, each one could easily stand on its own, and that is not an easy task to complete when writing a television series. I admired Dunham’s decision to make Hannah OCD, as she herself has dealt with the same problem, and it’s never easy as a writer to write about your own demons. I felt that this season’s best episode was actually focused on the boys of “Girls” (aptly titled “Boys”). It was quite fascinating to watch Adam and Ray (Alex Karpovsky) interact to get together, and to learn a bit about a boy’s view of life in New York City. I’m very curious to see where Dunham will lead us in Season 3 (and I’m hoping we will have more shirtless Adam Driver).

My boyfriend actually forced me to watch “Nathan for You”. Upon first viewing, I actually despised it. I found Nathan Fielder to be an obnoxious, dry moron who I thought may be slightly off. Yet the more I watched “Nathan for You”, the more Nathan grew on me. There is a weird sincerity to Nathan Fielder -- his business ideas are completely absurd (in one episode, he has a frozen yogurt cafe add in a poop flavor), but he seems to believe in them so much you can’t help but believe in them too. It’s very entertaining to watch the business owners stare at Nathan as though he is an alien, yet they politely nod their heads and go along with his plan. I really began to like Nathan when he set up a fake bachelor-type show so that he could practice his flirting skills, only for him to completely fail. Aw, Nathan, it’s okay to be awkward; you’ll one day meet an equally awkward girl. Until Season 2 returns, I recommend following Nathan on Twitter; you won’t regret it.

It isn’t really a surprise that “Brooklyn Nine-Nine” follows many of the tropes of “Parks and Recreation”; after all, they were created by the same people! The Brooklyn precinct is filled with the same sort of oddballs as those of the Pawnee Parks and Recreation department. I particularly enjoy the fact that there are two Jerry (or Larry) types on “Brooklyn Nine-Nine”, and any moment with Terry Crews is a brilliant one (my favorite so far was his stuffing pretzels into his mouth because he hadn’t had a Thanksgiving meal). Andy Samberg proves that he is more than capable of playing the lead in a comedic series, and the chemistry between him and police chief Ray Holt (Andre Braugher) is perfect. Next season is bound to be fun, as it has been announced that we will get to meet Braugher’s husband!

Where do I begin with the insanity that is also known as “Scandal"? This series is full of delightfully shocking moments and over-the-top soap opera antics. Kerry Washington is hell on heels draped in a gorgeous white coat who is ready to save the world. Her twisted relationship with President Fitz (Tony Goldwyn) is great fun to watch, as well as her team of “gladiators in suits”. “Scandal” walks a fine line between utterly cuckoo and brilliant. I’m not even going to try to predict what will happen next on this show; I’m just content to sit back and enjoy this modern-day saga.

10. “RuPaul’s Drag Race” (Logo) Any show that has a spot-on impression of Little Edie from Grey Gardens had to make this list. “RuPaul’s Drag Race” really went all out this last year, with the pageant rivalry between Alyssa Summers (who is like everyone’s favorite crazy aunt) and Coco Montrese, Detox’s weird lip-synching, a double elimination, and one full-blown lip sync throwdown to “Whip My Hair”, Season 5 of “RuPaul’s Drag Race” proved why this is the best reality show ever made. The comedy queens proved that they have just as much charisma, uniqueness, nerve, and talent as the fishy queens, while the fishy queens learned to not just rely on that body. February and Season 6 cannot come soon enough!

What were some of YOUR favorite shows this year?