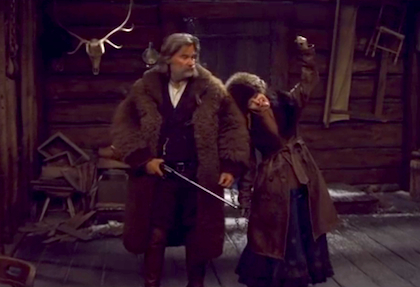 The Weinstein Company would like you to know that this is the 8th film from Quentin Tarantino. If we were to walk into theaters expecting this to be Tarantino’s 7th film, then absolute pandemonium just might occur. But luckily, they have emphasized at the beginning of the trailer for The Hateful Eight that this is, in fact, his 8th film, so I think we can all breathe a little easier and embrace our loved ones with confidence and grace.

Joking aside, though, it is a big deal that Tarantino is releasing another film, for he is an American filmmaker of some high regard that is adored by millions of fans and commands the respect of many denizens of Hollywoodland as well. He has attained his status in the filmmaking world on his own terms, and despite what you may think of his films, they always tend to offer something more substantial than a lot of the middling fare that takes up residency in our local cineplexes throughout the year. True, he has never made a Marvel movie, but we will do our absolute best to not hold that against him. What he has made, however, is a Western thriller that I am likely to see more than once in theaters if it’s as good as the trailer promises it will be.

If Agatha Christie had been hopped up on goofballs during her prime, then she might’ve written a story like The Hateful Eight, for the story has a sort of mysterious Murder on the Orient Express / The Mousetrap feel to it. Undoubtedly Tarantino’s penchant for violence and smart dialogue will come into play to shake things up and shape this film into the Wild West version Reservoir Dogs that I am thinking (and maybe kind of hoping) it will turn into. You see, Quentin Tarantino’s first film is my favorite film, and if his latest film should be anything like his first film, then his latest film might just become my favorite film instead of his first film. Tarantino’s latest vision is poised to make its debut on December 25 and boasts a fine cast of thespians including Jennifer Jason Leigh, Kurt Russell, Samuel L. Jackson, Tim “Mr. Orange” Roth, and Michael “Mr. Blonde” Madsen.

Mr. Tarantino’s last film, Django Unchained (a film that was so entertaining that you almost forgot that it was intelligent as well), took place prior to the Civil War, and now the master of Pulp Fiction is concentrating on a time that takes place after that terrible conflict. Two bounty hunters and one prisoner take up shelter during a blizzard with 5 other folks, and it is discovered that a deadly secret connects them all. Does it have something to do with why Daisy Domergue (Leigh) was accused of her crime in the first place, or does the secret revolve around the glowing gold light in Marsellus Wallace’s brief case?

“Room for one more?” One more film by the lovable and huggable Quentin Tarantino that is sure to be filled with gleeful violence and grim figures fighting to uphold their personal moral codes at any cost? Why, I believe the answer to that question is YES, and on Christmas Day, I will find myself planted in a dark theater instead of with my loving family in order to see such things brought to life by this great director. And remember, this is his 8th movie and I don’t want to hear anybody speaking differently on that fact.