'The Goonies' Sequel: How to Make Them "Good Enough" Again 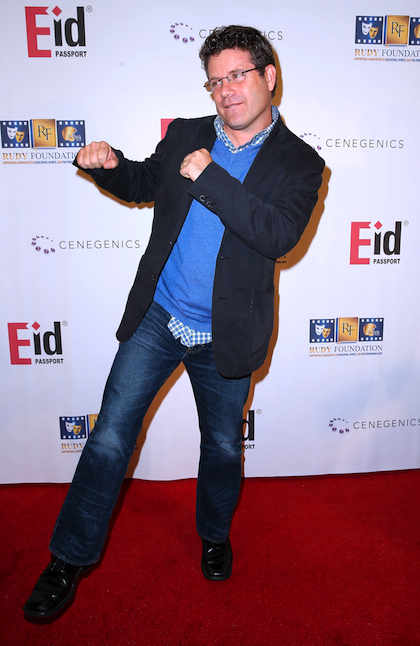 If that battle cry holds special meaning for you, then you will probably have some very strong feelings about the rest of this article.

As some of you have probably already heard, a sequel to the classic 1985 kid-adventure comedy The Goonies is in the works. I was hesitant to post about it upon first hearing the news, since it came from TMZ. No offense to those guys, but my first thought was that Chris Columbus was totally trolling them.

But in the ensuing days, other sources have come forward to confirm the news and add to it, such as the revelation that Steven Spielberg will be executive producing and came up with the story (which he also did for the original). So, grab a Baby Ruth and rejoice, y’all! The Goonies are (coming) back!

Of course, the question on everyone’s mind is, how the heck will they make this work? Let’s face it, the original Goonies are not only grown up, they are well into middle age at this point. Will the kids today pay to see a bunch of 40+ people they’ve likely never heard of slog through another adventure? I mean, people MY age would, obviously… So what will a Goonies sequel actually look like?

THE PLOT: I think the most obvious route here is to have the children of the Goonies try to go on an adventure too, get into a pinch, and their parents will have to band together once more to get them out of it. Done. What they should try very hard NOT to do, however, is make the sequel just a rehash of the original. That is, no pirate treasure, no escaped convicts, no rich a-holes trying to take over the town, and no inspirational speeches at the bottom of a wishing well. Okay, done. Let’s start fresh!

As for the characters themselves, that will, of course, all depend on the actors. It’s been nearly 30 years since the original, and times do change, so let’s now take a look at each character and how they can figure in to the new movie…

MIKEY (Sean Astin): Astin is no stranger to creating iconic film characters. Before he was Rudy or Samwise Gamgee, he was Mikey Walsh, the idealistic (and asthmatic) leader of a group of misfits from Astoria, Oregon, who called themselves the Goonies (short for “the Goon Docks”, a neighborhood in Astoria). It’s because of his determination to save his town that leads him and his friends to the secret hideout of the pirate One-Eyed Willie, who has enough treasure stashed away on his ship to pay off the douchebags trying to buy his and his friends’ houses (which they plan on turning into a golf course). It will be interesting to see if he still retains that wide-eyed innocence and passion of his youth, if he will be the one to lead the Goonies again, or if he will need to be convinced by others. I’m guessing the latter, and that brings me to…

BRAND (Josh Brolin): It still freaks me out when I see Josh Brolin today and remind myself that he was the same squeaky-voiced wannabe jock from The Goonies. Not to say he aged badly or anything… he just aged unexpectedly! Now known for more gritty fare like No Country For Old Men and Sin City, he’ll have to do a lot of work to tap back into that pretty boy character of yore. My guess is it’ll be his kids who are the ringleaders of the next generation Goonies that get into a pickle. And Brand will have to be the one to convince Mikey to get the old gang back together to help their offspring. It will be a fun bit of dramatic irony since, in the original movie, Brand was the one who tried the hardest to PREVENT Mikey from going on his adventure.

ANDY (Kerri Green): Here’s hoping that Miss Andy grew a spine in the years following the original film. She spent the whole movie pretty much on the brink of a nervous breakdown, so hopefully her experiences with One-Eyed Willie and the Fratellis hardened her up a little. So, I think it’s safe to say that she and Brand eventually got married and had kids. Neat and tidy. UNLESS they actually end up getting a divorce, and the events in the sequel force them back together again. In the end, they realize they can’t live without each other and share another kiss in water with her hands bound… or, maybe not. Oh, and she's a piano teacher.

MOUTH (Corey Feldman): If there’s anyone who should be jumping for joy at the announcement of this film, it would be Corey. He hasn’t exactly had the steadiest workflow lately, and this would be a perfect comeback for him as the character he is probably most identified with. I’m guessing Mouth grew up to be a used car salesman, or perhaps he even took over his dad’s plumbing business (and no doubt flushed it down the toilet… pun intended). Mouth has probably grown extremely bored with life and will probably be down like a clown for another adventure and a chance to relive his childhood. Count him in!

CHUNK (Jeff Cohen): Perhaps the only other castmember who could beat Josh Brolin for Most Unrecognizable From His Original Role is Jeff Cohen. Chunk was the overweight, well-meaning but always clumsy outsider of the group, so desperate to fit in but always getting the short end of the stick. How poetic, then, that he actually ends up kinda saving the day after he befriends another outsider, Sloth (the deformed 3rd brother of the Fratelli family). As for Jeff Cohen himself, he not only lost all that baby weight, but he left acting for good. To become an entertainment attorney! Well, I certainly hope he dusts off his old actor hat for this film, because it would be amazing to re-introduce Chunk (real name Lawrence) as a successful businessman, no longer the laughingstock of his peers. He still struggles with self-esteem issues, though, which no doubt come up in the course of the film when he is reunited with his childhood buddies who always gave him such a hard time.

DATA (Jonathan Ke Quan): Okay, this one could go one of two ways. Data was the ultra-smart whiz-kid with a trench coat full of crude but somewhat useful inventions that got the gang out of quite a few sticky spots (pinches of power, yo!). Data either grew up to be yet another tinkerer whose inventions are still of a decidedly mediocre caliber (like the dad in Gremlins), OR he hit pay dirt with one super amazing technological patent that made him filthy rich and the owner of a fleet of jet planes. I say, combine the two: the invention that got him rich was a fluke and he is forever trying to live up to it and come up with the next big thing. Perhaps he discovers it during his adventure with his old chums…

STEF (Martha Plimpton): Ah, good ol’ Stef. Martha Plimpton went on to play a few more acerbic teens before adulthood set in for good, and it was slow going there for a while until she found a resurgence on the show “Raising Hope”, for which she was nominated for an Emmy. She actually WON an Emmy in 2012 for a guest appearance on “The Good Wife”. Martha has found a second life on TV, but it would be great to see her on the big screen again. No doubt Stef grew up to be some kind of entrepreneur. In what exactly, I’m not sure, but I bet her particular set of skills will come in handy to the Goonies, and they will recruit her for it. Naturally, she will resist, but in the end she’ll do it because she wants to see if she can rekindle the old flame with Mouth. Why not?

SLOTH (John Matuszak): There’s good news and bad news. The bad news is, the actor who originally played Sloth, football star John Matuszak, passed away in 1989. The good news is, though, that he was wearing so much make-up and prosthetics that they could easily cast someone else. Though it seems hard to imagine that Sloth himself made it more than 20 years after the events of The Goonies. Sloth was frightening enough in 1985, imagine him 30 years later! Yikes!

Then there’s the Fratellis. Let’s assume they got life in prison and will stay there. Let’s introduce some new villains into the mix.

So, I think if Spielberg and co. keep the above in mind, we’ll be in good shape. Fingers crossed that these new Goonies will also never say die!