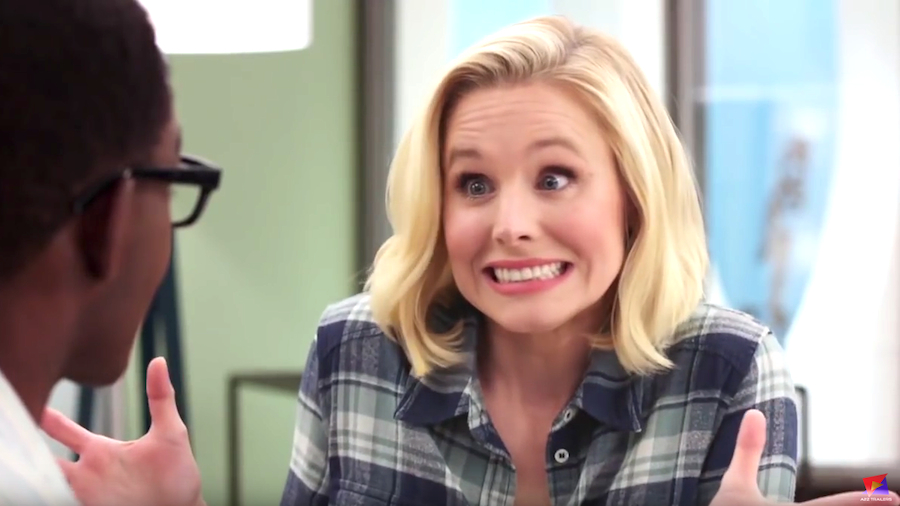 In case you missed it, last week marked an odd hour-long premiere on Monday with a follow-up half-hour episode at its regular time on Thursday at 8:30 PM… in the same week! The Kristen Bell vehicle “The Good Place” has gotten good reviews all around by credits, but I’ve got to say I was more than skeptical at first about this one. I’ll share why...

To set it up, it was a while before I learned the show was made by “Parks and Recreation” creator/“The Office” Dwight Shrute’s cousin Mose a.k.a.Michael Schur. As a huge fan of both “Parks” and “The Office”, it probably would’ve changed my perception from the start, but I don’t know for sure. To be honest, a lot of the promotional material made no sense to me and was, as a result, very unappealing. One of the big billboards I saw around L.A. featured stars Kristen Bell and Ted Danson sitting on a couch, tagged with a quote from the show stating, “What the fork?”What the fork? What the fork does that mean? It would be a constant question in my mind as I was stuck in relentless traffic, but still I didn’t seek out a full-length trailer online. Instead, I saw a short one on TV and was still not sold on what I was viewing.

Right now, you’re probably saying, “Wait, is this going to be a scathing review of this show? That’s not what the title implied.” This is where the article takes a complete 180-degree turn.

I came home one night after a long day of work to my girlfriend watching it. She told me that she would restart and didn’t mind doing so because this show was just too forking funny. “Fork it,” I said. “Why the fork not? What am I really going to forking do? Tell her to turn this possible abomination the fork off?” Then I saw on the credits that behind it was Michael Schur, and he brought powerhouse writers from “Parks and Rec” with him, like the always hilariousJoe Mande, Megan Amram, and “Master of None” co-creator Alan Yang. It just got better from there as the laughs kept coming.

Now I’m ranting and you’re probably sitting there reading this all thinking, “What the actual fork is this son of a bench show about?” I’ll tell you. The show opens with Bell opening her eyes, much like “Lost” (potential spoiler because who knows for sure what happened at the end of “Lost”?), but you find out right away that everybody in it is dead, including Bell’s character Eleanor. The show posits that all religions have gotten the whole afterlife think about 5% correct and there isn’t a true Heaven or Hell, but there is a "good place" and a "bad place". Eleanor makes it into the good place and is greeted by the guy who runs her section of it named Michael, played by Ted Danson.

Everything in the good place seems pretty awesome as Michael shows Eleanor around the neighborhood and then brings her to her dream house. Then we get the twist -- Eleanor is the wrong Eleanor. She died and there was a mix-up. In flashbacks, we see what a terrible person she is and how she should go straight to the bad place. (It’s not evenher dream house!) As the pilot proceeds, she realizes that if she acts bad in the good place, her cover will be blown, so she tries to turn good because the bad place sounds worse than bad, it sounds horrid. That’s “The Good Place” in as short of terms as I can give you, but if you’re not a fan of reading, then below is the trailer, which will tell you pretty much what I just told you, but with bright colors and Kristen Bell’s cuteness.

Last thing I will tell you is that “The Good Place” isn’t just good… it’s great! It’s really surprising on premise alone that this is actually a network show. It feels more in the vein of former NBC show-turned-Netflix original “Unbreakable Kimmy Schmidt”, which makes it even more bizarre that NBC is keeping with it. Since this is Schur, however, it should be noted that if you liked “Parks and Rec”, and Andy, April, and the townsfolk of Pawnee were your favorite characters, you’d probably really like “The Good Place”.

I might be speaking early since this show has only aired three episodes, but it definitely has the goofy humor of all of those characters, more so than what “Parks” brought to the table as a whole. But if you just simply liked “Parks” overall, this should still definitely be a show for you. Just keep in mind so far it’s more about the jokes than the heart or emotions of some of “Parks”. But, hey, there’s still a whole season to see what else happens! (Also, my girlfriend loves “The Good Place” and couldn’t finish the first season of “Parks”, so, really, anybody could like this.)

Catch up on the first three episodes of “The Good Place” to see what “fork” actually means, and then, while you’re at it, catch the newest episode TONIGHT at 8:30PM on NBC! Wait? Is that it for free below? Nope, but this sums up the afterlife for you!