The Academy Spreads The Wealth At 2016 Oscars! 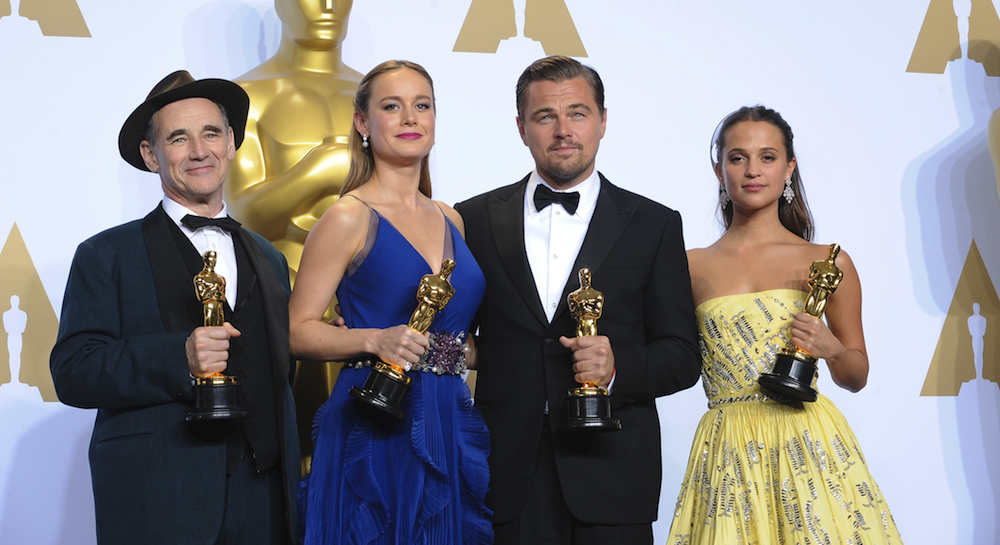 As I am sure you were aware, the theme surrounding last night’s Academy Awards ceremony was “diversity”… And if you were not aware, host Chris Rock was on hand to remind you at every available opportunity.

It was difficult, though, to notice an actual lack of diversity with regards to both the films themselves and the folks being awarded for them. The best Oscars ceremonies, in my opinion, are ones that give us a little bit of this and a little bit of that. When one or two films dominate the field any given year, that gets boring, not to mention predictable. Which is why I think the 88th Academy Awards were, in fact, one of the most diverse in terms of winners that we’ve seen in a while.

The big winner of the night, surprisingly (or is it?), was Mad Max: Fury Road, which swept both the visual design categories (Best Costumes, Production Design, Hair & Makeup) and the sound categories (Mixing and Editing) as well as picking up a Best Editing nod. Considering the unlikelihood that that neither the film itself nor director George Miller would be walking away with trophies, I felt this was a fine compensation for what was the best-reviewed film of 2015 (and rightly so). It’s just too bad that all of those awards ended up contributing to the unfortunate shut-out of the highest grossing film of all time, Star Wars: The Force Awakens.

Last night’s ceremony also saw an Oscars rarity – the Best Director and Best Picture winners were not from the same film! For the second year in a row, Alejandro Iñárritu walked away with the Best Director trophy (for The Revenant), and also for the second year in a row, a film starring Michael Keaton was named Best Picture, in this case Spotlight, which shocked everyone by upsetting Iñárritu’s frontrunner.

Not to worry, though, as The Revenant also picked up Oscars for Best Cinematography to Emmanuel Lubezki, his third in a row, and also, of course, to star Leonardo DiCaprio, who can finally unclench his perfect buttcheeks after decades of Academy snubs.

In addition to the big Best Picture win, Spotlight also received an understandable nod for Best Original Screenplay, while the guy who wrote Anchorman and Step Brothers won an Academy Award for Best Adapted Screenplay for The Big Short (dream big, kids!).

Meanwhile, Star Wars: The Force Awakens was upset by that other movie starring Oscar Isaac and Domnhall Gleeson, Ex Machina, by taking home Best Visual Effects, and the other star in that movie, Alicia Vikander, was named Best Supporting Actress for yet another movie, The Danish Girl. Whew!

In fact, the winners of the Big Five awards of the evening (Picture, Actor, Actress, Supporting Actor, Supporting Actress, and Director) were gleaned from four different films, which is always exciting to see. To the surprise of no one, Brie Larson completed her Award Season dominance by being named Best Actress for Room, while Mark Rylance cashed on his understated-yet-brilliant performance in Steven Spielberg’s slow-burn Cold War thriller Bridge of Spies.

Rounding out the night was 87-year-old composer Ennio Morricone finally making good on decades of brilliant work by nabbing his first Oscar for Best Original Score for The Hateful Eight, proving the age-old adage “It’s never too late!”, while Grammy winner Sam Smith added an Oscar to his mantle thanks to his Spectre theme “Writing’s On The Wall” for Best Original Song (but seriously, though, as if the James Bond theme was gonna lose!).

It should also be noted the amount of thick accents behind many of those acceptance speeches too, which many talented folks from all over the world got a taste of Oscar glory. For my money, last night’s Academy Awards displayed a fine amount of diversity – and it’s only going to get better!