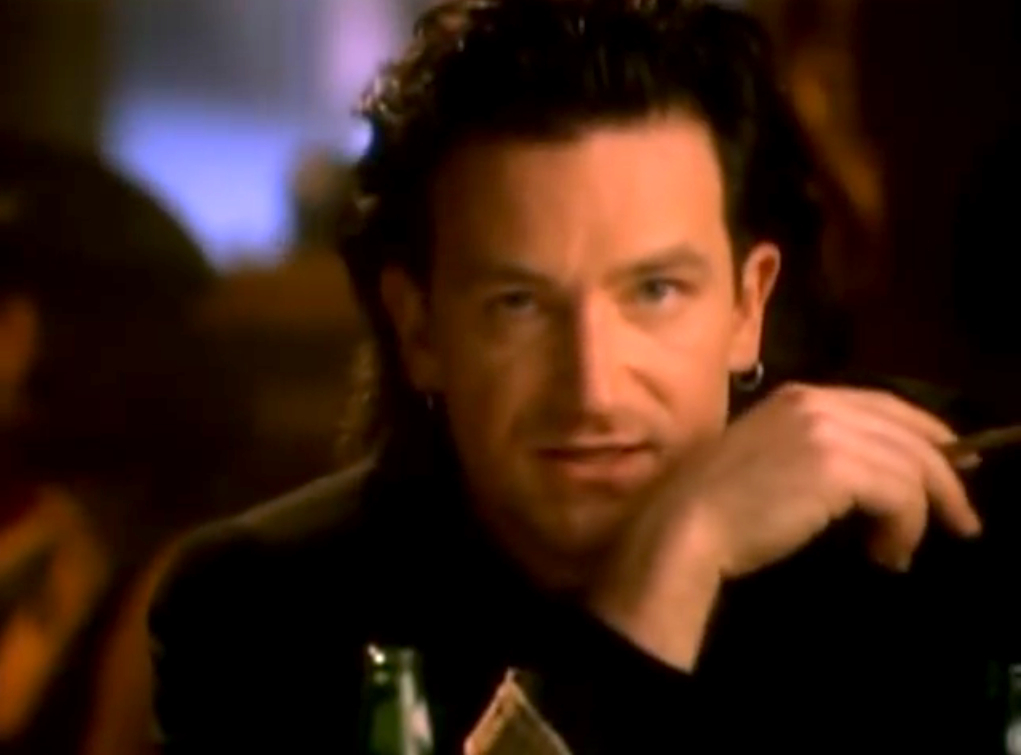 Just in time for St. Paddy's Day, let's look back on a classic ballad from a still-relevant Irish band and the three -- yes, THREE! -- different visual interpretations of it!
In the annals of the U2 catalogue, there is but ONE song that perhaps best exemplifies the message advocated by the band -- and frontman, Bono -- quite so well as their 1992 hit single, "One". Thus it probably should come as no surprise that it took three tries for them to settle on a music video that was satisfactory to all.
The song was the third single off their (arguably greatest) 1991 album Achtung Baby, and as soon as it hit our eardrums, we officially realized that these guys were way more than just the quaint be-mulleted Irish rock band of the '80s -- their music actually MEANT something! In the ensuing years, "One", a little ditty about striving to overcome difficulties in relationships and realize that, in the end, we are all cut from the same cloth, has gone on to be the battle cry for human rights, social justice, the fight against AIDS, and spiritual connectedness. It's even the name Bono chose for his international aid charity.
So, how does one visually depict a song with so many faceted and far-reaching messages? All three attempts certainly have their own merits, depending on how deep you want to go.
The first version, directed by Anton Corbijn and filmed in Berlin, depicts a sepia-toned world that includes the band jamming to the song, a Trabant automobile driving aimlessly, a lonely old man, and members of the band taking turns in drag. The group ultimately decided to pull and shelve the video when they began to fear that the images of them crossdressing would send the "wrong" message, especially in light of the song's being a benefit single to go towards AIDS research. I can see their point, but quite frankly, I enjoyed that aspect the most in this video, as it serves to portray their message  that, despite our differences, we are all "one" in the same. Our connectedness transcends gender. I thought it was very effective. Judge for yourself below:
The second attempt was definitely their most esoteric. In the hands of director Mark Pellington, all likenesses of the band were completely abandoned in favor of some grainy footage of prancing buffaloes. Basically, the video is made up of nothing more than buffaloes, some flowers, title cards with "One" written in different languages, and finally a painting of buffaloes committing mass suicide. Hm. Needless to say, the band didn't think this video would be the best in promoting the song or the message either. I have to agree -- I'm sure there's some deep, profound meaning attached to suicidal buffalo and flowers, but if you want to go mainstream, you have to be a little more relatable to your audience. Having said that, I'm sure there's a fringe group out there who finds this video brilliant and possibly the answer to all of Life's questions. What do you think?
The third time was the charm when Bono & Co. hooked up with director Phil Joanou in Manhattan. The final take, and the one they all agreed on, primarily features Bono hanging out at a nightclub and directing the song's lyrics to the camera, as if it is another person at the table with whom he is having a heartfelt, philosophical discussion. This is intercut with some (occasionally distracting) footage of the band playing live. This became the version we all now associate most with the song, and for good reason. The simple shots of Bono sitting and staring intently into the camera as he delivers his lines are actually rather stirring. It really feels like we are a part of his world, listening raptly as he explains to us his dilemma in knowing we're infinitely connected and yet are destined to cause each other grief ("We're one, but we're not the same / Well, we hurt each other, and we'll do it again"). At one point, he even stops moving his mouth to the words, just staring at us ruefully as the lyrics continue on -- we are now in his head and can hear his thoughts. But of course -- we are "one", after all. It's all rather uncomfortable, yet we can't look away. See for yourself (Note to U2's VEVO handlers: this is NOT the Anton Corbijn version! tsk tsk):
Which ONE is your favorite?
(Image via U2VEVO)
- Katie Marzullo, YH Staff Editor
[email protected]