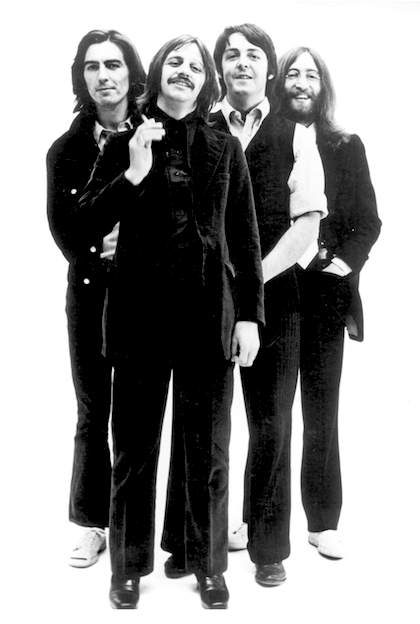 I haven’t posted anything on The Beatlesin a long time, and, well, I’m just in the mood! Well, that, and today is the 50th anniversary of the band's first appearance on American television...
This time around, I want to feature a couple of Beatles singles that some of y’all might not know about – or, at the very least, might not remember. I’m talking about the two tracks the Beatles released in 1995.
No, that’s not a typo. I said 1995. If you’re wondering how it’s possible that all four – yes, all four! – of the Beatles were able to come back together for two brand new singles fifteen years after John Lennon’s death, then thank the gods of modern technology! (Well, ‘90s technology anyway…)
Basically, the two songs – “Free as a Bird” and “Real Love” – were discarded demos by John that he recorded before he was killed. The three remaining Beatles (Paul, George, and Ringo, of course), dug them out, cleaned them up, added their own touches, and voila! The first new Beatles music in 35 years!
The tracks were released to the public in conjunction with the 1995 8-part documentary series, “The Beatles Anthology”, and corresponding set of 3 double-albums. Yes, Christmas ’95 was Beatlemania all over again! These two new singles were just the icing on the cake. My dad, a lifelong Beatles fan, said that he teared up the first time he heard the opening harmonies on “Free as a Bird.” Indeed, listening to those voices come together one more time, even in the gaping absence of John Lennon, is a moving experience.
The music videos that accompanied the songs were pretty interesting in their own right as well. First, we have “Free as a Bird”, which takes on a sweeping, bird’s eye view journey through the world of The Beatles, splicing in archive shots of the boys with images that pay homage to some of their most memorable hits – the fatal car wreck from “A Day in the Life”, Eleanor Rigby’s gravestone, portraits of Chairman Mao, and even a Blue Meanie! CGI was still pretty new in 1995, so this video was considered rather state-of-the-art at the time...
“Real Love” is a bit more straightforward and less ambitious without sacrificing some good sentimentality. It combines B-roll footage of Paul, George, and Ringo in the recording studio in 1995 intercut with old home movies from their Fab Four days. More than anything, this video seems to be a love letter to their missing mate, John.  “Real Love” indeed...
It’s a harrowing thought to realize that only half of The Beatles are still with us. R.I.P. John and George.
- Katie Marzullo, YH Staff Editor
[email protected]