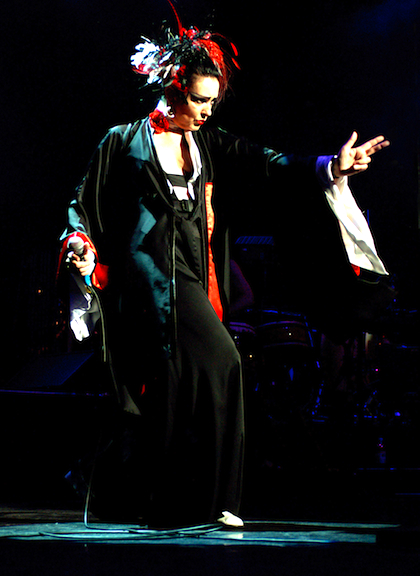 Follow me a little ways off the beaten path, won’t you?

I love a musical act that shirks classification or genres. Siouxsie and the Banshees is one such conglomerate. Led by the forlorn-voiced goth diva, Siouxsie Sioux, the band has been pegged as anything from punk, gothic rock, and new wave, to alt-rock, post-punk, and avant garde. One thing we all can agree on, though, was that S&TB were in a category all their own, with a seemingly unlimited supply of experimental drive and risk-taking.

The band originally formed in that weird, limbo-like transitional period when ‘70s glam rock was getting stale and punk legends the Sex Pistols were still unsigned. In true punk fashion, the band was more or less sort of jerry-rigged for impromptu shows consisting of “borrowed” band members (to support lead singer Sioux and bass player Steven Severin) and improvised music. Slipshod as it was, it worked, with audiences demanding additional shows. Eventually, Sioux and Severin locked down some “real” musicians for their new band, fine-tuned their sound, and started releasing some records. Eleven studio albums and two #1 singles on the U.S. Modern Rock charts later, Siouxsie and the Banshees have left a deep, spike-shaped mark on the music world.

It’s only natural that the music videos coming from a group like this would be equally esoteric and experimental. Even if you aren’t particularly feeling their sound, you can’t help but be completely mesmerized by Siouxsie. Looking like a 1920s vamp mated with Robert Smith, she stares longing into the camera, through the lens, into your very soul, beckoning you into her emo world. How can you refuse?