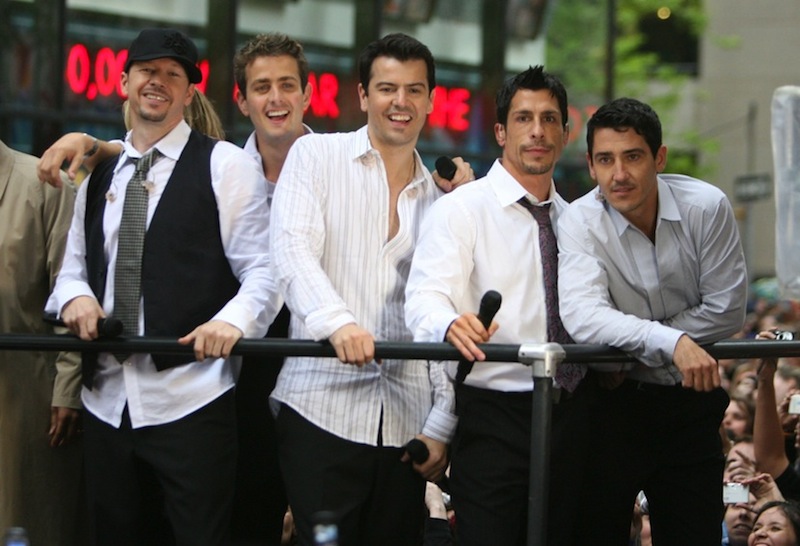 Look, I’ll be perfectly straight with y’all, because I like you and I think we have a good thing going here…

I was not a fan of New Kids On The Block. They first hit the scene when I was a ‘tween, so I was their prime demographic. All my classmates, girlfriends, and cousins were obsessed with them. Their songs played ad nauseum on the radio. I couldn’t escape them even if I wanted to (and I often wanted to). They just didn’t do it for me. Much like a non-drinker going to college, being the only 10-year-old on the planet who does not worship NKOTB was a one-way ticket to Lonely Town. Sigh.

HOWEVER, I was not completely ignorant of their appeal. Five young, good-looking Boston boys with some slick moves and uber-catchy songs – yeah, I see what you did there. Hell, I admit I had a soft spot for Jonathan Knight (but mostly because he has the same birthday as me). And their success was certainly no fluke. With three #1 singles and two #1 albums in a two-year span, the boys continue to get together to cut albums and go on tours every once in a while, moistening the panties of their original now-30-something fans and introducing themselves to a whole new generation who digs the boy bands of today like One Direction, The Wanted, and Big Time Rush and also their direct descendants like NSYNC and Backstreet Boys.

Neither “new” nor “Kids” anymore, as even little Joey McIntyre is now in his 40s, but they have definitely not lost their appeal. In fact, I would say that I probably like them more now than when I (and them) was a kid. Go figure!

So, in honor of this pioneering boy band “hangin’ tough” and celebrating 30 years of being peachy-keen teen dreams this year, let’s look back on some of their classics plus peep a couple of their more recents, including their newest "Thankful", which just dropped on Friday!

You can currently see NKOTB on the Total Package Tour, but hurry up and get tickets cuz the tour wraps up in just a few weeks!