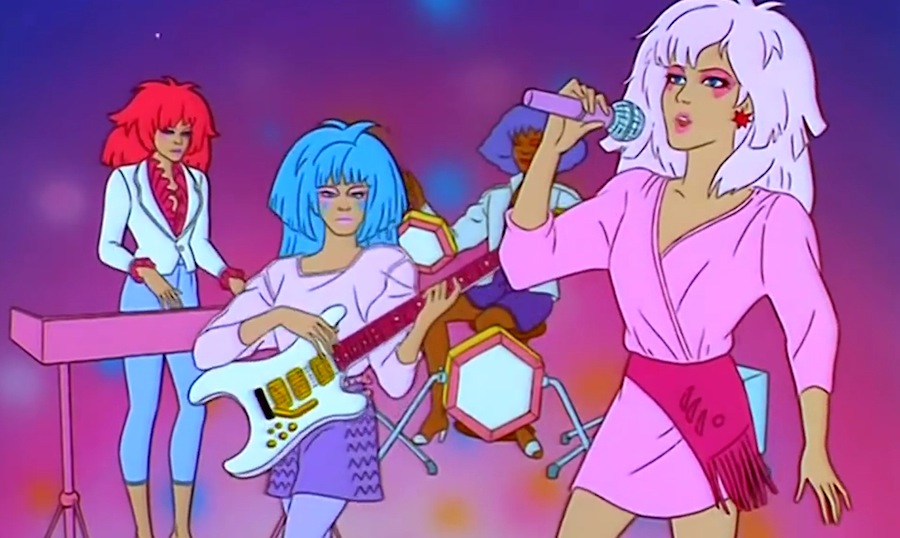 I have to say, I feel sorry for young girls (and boys?) today who didn’t have the pleasure of growing up with Jem. I mean, Barbie was fun, but Jem was EVERYTHING. Whatever Barbie did or had, Jem did or had it better. She was a rock star, for crying out loud, and from head to toe, she and her bandmates were FIERCE! The show (a cartoon, obvs, which ran from 1985-1988) followed the adventures of Jerrica Benton, the owner of Starlight Music Company, who meets and befriends a computer named Synergy that can magically turn her into a rock star named Jem. Not surprisingly, Jem becomes the Starlight’s #1 act (their only act, if I’m not mistaken), and Jerrica/Jem’s pals Aja, Shana, Raya, and Kimber (Jerrica’s sister) become her bandmates, and Jerrica’s purple-haired boyfriend Rio is their road manager. J&TH’s main competition is another girl group called The Misfits, led by a sociopath named Pizzazz, as well as a devious music exec named Eric Raymond who wants to take over Starlight Music. Eric and The Misfits team up to sabotage Jem on pretty much a daily basis, and conflict, fabulous clothes, and rock music ensues!

It might be controversial to say this, but here goes: I always preferred The Misfits. Yes, they was some cray beyotches, but at least they embodied the TRUE spirit of rock and roll – they were loud, rebellious, and took no crap. Also, their music was WAY better! Not that Jem and her girls didn’t have skills, but come on… All of their songs were about caring and sharing and loving your neighbor… BORING!!! I mean, there’s certainly room in the music world for that too, but it’s hardly very “rock”.

But, hey, I’ll let you decide! This week, I’m featuring some of my favorite, classic Jem/Misfits videos from the show! Oh yes, things got funky once the music started playing. It was the best part by far. At the very least, it was a break from Jem crying over the fact that Rio wouldn’t hook up with her… BECAUSE HE WAS ALREADY DATING JERRICA. Yes, Jem was upset because Rio wouldn’t cheat on her. Huh.

ANYWAY, check out these deliciously ‘80s jams below, and just try not to be humming them for the rest of the day!

And my all-time favorite:

So, what’s the verdict? Team Jem or Team Misfits??