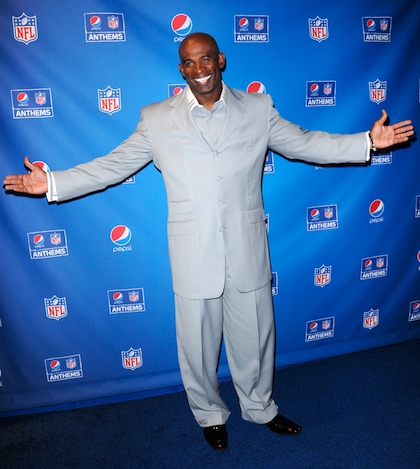 Seems like every pro athlete these days has some kinda little side music gig going on. Makes one wonder if the whole being-great-at-sports thing isn’t just a stepping stone to pursue their REAL passion… At any rate, even those sports stars with hip hop albums are a dime a dozen these days, nobody capitalized on this (for better or for worse) like Deion Sanders.

I guess it’s little wonder that Sanders figured he could dominate the music game, seeing as how he was pretty great at ANY type of game he set out to pursue. In an extremely rare feat that I have yet to see repeated (sorry, Michael Jordan), Sanders played in not one but TWO pro sports! While winning Super Bowls with the San Francisco 49ers and Dallas Cowboys as cornerback in the NFL, he spent his free time also playing outfield for the Yankees, the Giants, and the Braves (that latter team with which he went all the way to the World Series in 1992).

Deion was often lambasted for being a little arrogant, but ya know what? He kinda had the swagger to back it up. Some athletes spend their whole lives just trying to get some field time in ONE professional football or baseball game. Deion not only played in both the NFL and MLB, but he excelled in them and was a key player.

Then, 1994 rolled around and Deion decided to release a rap album, because why not? Prime Time wasn’t exactly Grammy material, but Deion’s notoriety – and his bromance with MC Hammer – kept it well within pop culture consciousness. It’s a chapter of ‘90s kookiness that we can all look back on now with bemusement.

So, in honor of the 49ers making it back to the Super Bowl today, let’s get our swagger on ‘90s-style with Mr. Prime Time himself! Check out his two “hits” “Must Be The Money” and “Prime Time Keeps On Tickin’” below, followed by a couple Hammer jams he appeared on/in!