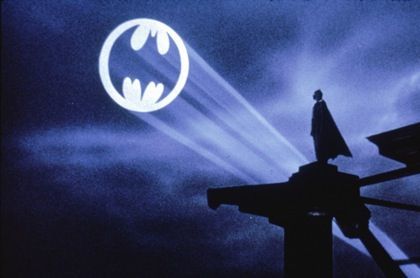 There are approximately 6,853 different movie versions of Batman, and Ben Affleck's from the upcoming Batman v Superman will be the 6,854th. For some reason, the only thing I remember from any of the previous incarnations is the music and music videos that were inspired by them.

Thus inspires this collection of videos that I have for you today. A really good soundtrack video seems to be a thing of the past these days, as the only videos to be seen relating to the Christopher NolanDark Knight trilogy are fan-made mash-ups on YouTube to random emo songs. But back in the day -- back when MTV and VH1 still played music -- a lot of thought was put into a good theme song video. Here are FOUR to get your toes tapping and bat wings flapping...

First up, the one that started it all, from his Royal Purpleness, Prince, who pretty much had a monopoly on the entire soundtrack of the original Batman (1989). Here he is gadding about in silly costumes for the video to his song, "Batdance":

Next, a selection from the follow-up film, Batman Returns (1992) from Siouxsie and the Banshees -- this one doesn't include any clips from the film, but it's a definite homage to Michelle Pfeiffer's immortal Catwoman. Here's "Face to Face":

Batman Forever (1995) had arguably the most prolific soundtrack, which spawned at least two excellent music videos. The first is from U2, "Hold Me, Thrill Me, Kiss Me, Kill Me," and instead of clips from the movie, they chose to focus on the comic book aspects:

The second video from Batman Forever and the last on this list is what I consider to not only be the best of the Batman bunch but also one of THE best music videos from a movie ever made. The way the clips from the film are woven into the music is brilliant and really showcases the surreal and moody atmosphere of the flick. Here's "Kiss From a Rose" by Seal: