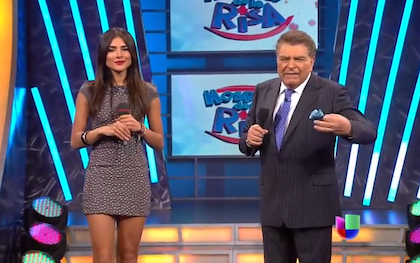 Sad to say that, after 53 years on air, everyone’s beloved weekend variety show will be going dark on September 19, 2015. No it’s not “Saturday Night Live”… it’s “Sabado Gigante”! Wait, you’ve never heard of “Sabado Gigante”? Well, let a white kid from rural America tell you what this Spanish-language family program on Univision is all about.

“Sabado Gigante” is an American-Chilean variety show that is actually quite popular in America. Reaching over 2 million views, it dominates Saturday night television. For the past 53 years, the show, headed by it’s host Don Francisco, is a staple in Spanish-speaking homes looking to watch sketches, interviews, and a favorite segment of mine when I was child with nothing to do on Saturday nights -- throw things at a woman with big boobs and see what faces she makes! Okay, I’m sure there was more to it, but when you only have a 4th grade education in Spanish, you certainly can’t even keep up with everything they’re saying on “Sabado Gigante”, let alone understand it. Still, I watched this show regularly when I was boy without really knowing what was going on because there was just something so fascinating about it.

Since 1962, Francisco and “Sabado Gigante” have entertained many, but they also had some pretty interesting moments over the years, like when Francisco recently interviewed President Barrack Obama. That’s right, this show has had this much of an impact:

Whether you realize it or not, another end of an era is upon us. First it was David Letterman leaving “The Late Show”, then Jon Stewart leaving “The Daily Show”, and now “Sabado Gigante” is no more! What’s next? Are “The Simpsons” and “SNL” going to end their multi-decade runs too? Not likely, but let’s just start a pool to see who’s next. Until the next strike is fired, check out some “Sabado Gigante”; I swear you don’t even need to speak Spanish to get what’s going on: