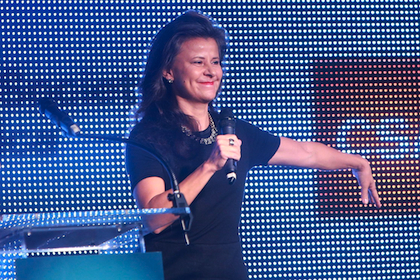 There's a track on One Direction's second album, Take Me Home called “They Don’t Know About Us”, and it immediately made me think of a 1983 hit single by Tracey Ullman by the same name.

It's totally not the same song, but the damage has been done. Just the thought alone brings back a flood of memories from my (very) early childhood when Tracey Ullman was known for being a quirky pop singer and not the immensely talented and diverse comedienne/actress that she is today, and the cute music video showcasing both her vocal talents and flare for comedy was in heavy rotation on the then-new MTV.

The song, first composed and recorded in 1979 by British singer/songwriter Kirsty MacColl, harkens back to the old girl group doo-wop songs from the late-‘50s and early-‘60s. Tracey played up this element in her version, transforming MacColl’s rather morose vocals into something more spunky and lighthearted, and also in her video, which starts off looking like a mix of outtakes from Grease and my parents’ old 8mm home movies (which, incidentally, also contained quite a bit of bowling) and then ending with a rather, um, harsh reality. I didn’t “get it” at the time, of course – I was only, like, 4 – but it didn’t matter, because I adored the song and I thought Ullman was hilarious. In fact, I would make my mom do the little shopping cart spin with me in it every time we went to the grocery store. (Sigh.)

So, check out the cute little video below, from way back over 30 years ago. And yes, that is EXACTLY who you think it is in the car at the end.