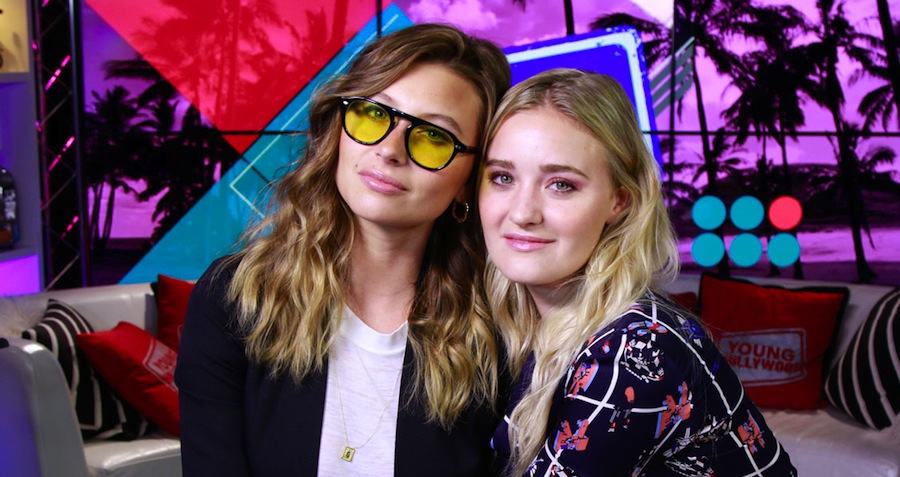 They were way taller than I had expected, almost like two Amazonian nerd-chic models who were dressed in fabulous yet casual back & white ensembles. After releasing their first single in nearly ten years, "Take Me", under their original moniker, the singing sister duo joined us is the YH Studio to discuss their journey, new music, and how they have evolved as artists since their Disney days. Considering they were able to self-host and interview each other, it was amazing to see that they are just as close in real life as we had imagined when we listened to Insomniatic back in the day.

As we know, they have had a fabulous acting career while on break from music (The Roommate, Easy A, Super 8, "The Goldbergs", etc.) but have ultimately found their way back to their first love... with a little nudging from Aly! Even though they admitted that it was a scary move to re-enter the world of music, it was a risk they knew they had to take, and thank goodness they did. Their music has matured in the same way they have while maintaining their trademark poppy California girl sound. While drawing on inspiration from the West Coast, the sisters and self-professed "nerds" have also included some nostalgic '80s undertones in their new EP. Their ultimate goal for people listening to their music would simply be to "drive along PCH with the windows down and relax to their new album."

Check out Part 1 here, and watch Part 2 below where Aly & AJ take the ultimate Sister Challenge!