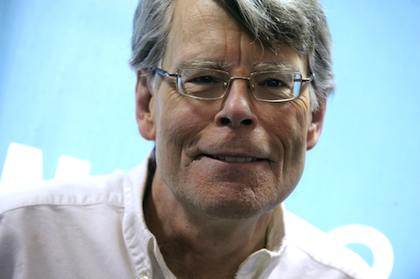 The beams continue to hold strong as evident by the news that just recently came out about The Dark Tower film adaptation, which has been languishing in development hell under the light of The Peddler’s Moon for the past 2 years. It seems that Ron Howard and Brian Grazer have not forgotten the faces of their fathers and are proceeding with their adaptation of Stephen King’s magnum opus, only this time it will be Sony Pictures & Media Rights Capital producing the films and the television show that will go tie in with it.

Yes, you read that right -- A television show will serve a s a companion to the film series (sort of like "Agents of S.H.I.E.L.D." and the Marvel universe movies), although how the stories will be divided up remains to be seen. Initially it was thought the first book in the series (The Gunslinger) would be turned into a film, and the second book (The Drawing of the Three) would be the 1st season of the television show, and so on and so forth. The only thing we know for certain is that legions of Dark Towerfans are finally going to see their favorite world and characters come alive on the big and small screens alike. Truly this is a time for everyone to dance the harvest dance and sing "Come-Come-Camalla" at the top of their voices! You... you don’t know what the hell I’m talking about, do you?

Okay, for those that haven’t read the books, The Dark Tower series takes place in a medieval world with some western trimmings. Think "Game of Thrones" but instead of the gates to the castle opening and a king or knight striding down the great hall, a rugged cowboy marches in and collapses wearily on the throne. The story follows Roland Deschain, the last of the Gunslingers, and his quest to reach The Dark Tower which lies at the center of his world. He knows in his heart that he must reach the Tower to protect it, for if the Tower falls, so does all of reality. His quest brings him into contact with the likes of Jake Chambers, Eddie Dean, and Odetta Holmes, people from our reality who have found themselves caught up in Roland’s adventures. They must travel through this strange and nearly lifeless world and avoid the wrath of the evil wizard Randall Flagg and the even more powerful force that controls him. It is an epic tale that exposes a world in which all of King’s stories are connected in some way, shape, or form. For fans of Stephen King, it his ultimate masterpiece. I personally thinkIT is his masterpiece, and one that deserves proper adaptation on the big screen, but apparently you can’t always get what you want. Ahem... Moving on, shall we?

Word has also come in that Sony Entertainment is eyeing Nikolaj Arcel to direct the first feature film in the series. Mr. Arcel is the man who wrote the screenplay for 2009’s Girl With The Dragon Tattoo (the excellent Swedish version) and directedA Royal Affair, which was nominated for Best Foreign Language Film Oscar back in 2012. Mr. Arcel has an excellent eye for drama and a taste for the macabre as well. But more importantly, he is purportedly a huge Stephen King fan with an intimate knowledge of The Dark Tower series. This is not bad way to start things off, and I personally wish all involved the best of luck, as I am myself a Dark Tower fan myself and cannot wait to see its world and characters realized on the silver screen. To all those involved in it’s making, I say thankee-sai and implore you to aim with your eyes and film with your hearts.