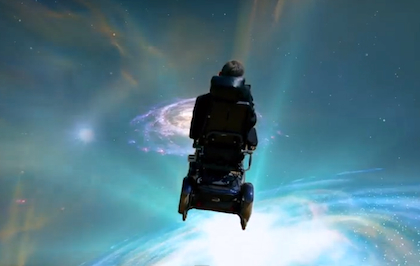 And now for something completely different.

We all know who Stephen Hawking is -- a renowned theoretical physicist, cosmologist, author, and the Director of Research for the Centre for Theoretical Cosmology at one of the world’s most respected colleges in the world, the University of Cambridge. Now he can add "singer" to his resume.

Hawking has appeared on comedy television shows such as “The Simpsons”, “Little Britain”, and “The Big Bang Theory”, and he is even been known to crack a joke or two every once in a while on his Facebook account. Recently, Hawking decided to debut his “vocal” stylings with a fitting cover of Monty Python’s “Galaxy Song” from their film The Meaning of Life. In this music video of Hawking’s cover, you can see retrospective and newer clips of Monty Python performing as well as Hawking running over pedestrians with his wheelchair and cruising through the one place he knows best, Space:

I loved hearing the crooning styles of Mr. Hawking, and if you did too, then you get to purchase “Stephen Hawking Sings Monty Python… Galaxy Song” on iTunes today. Not a digital copy fan? Well, you can get it for a limited time on 7” vinyl at your local record store this coming record Record Store Day, which, if you didn’t know, is this tomorrow, Saturday, April 18.

Until then, I’ll be waiting with anticipation to see what Hawking will cover next. I’m hoping for Metallica’s “Sand Man” or Beyonce’s “All my Single Ladies”!