"How To Train Your Dragon" Series Coming to Netflix This Summer! 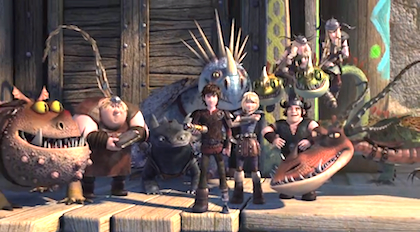 Netflix just announced that they will be premiering a new series spinoff of the Academy Award-nominated film How to Train Your Dragon. The movie is about a young Viking who befriends a wild dragon and find that humans have merely misunderstood the beautiful, giant creatures. (Danaerys Targaryen probably needs to see this movie, amirite??)

Hiccup and Toothless become a formidable duo in the film, which led to a just-as-successful sequel, How to Train Your Dragon 2, where the duo discover a land inhabited by more dragons than they could ever imagine, along with a few more expected discoveries along the way.

The new Netflix series will be called "Dragons: Race to the Edge" and will feature our favorite duo leading the Dragon Riders to find an artifact that conceals secrets of new lands and new dragons. But new dragons means dragon hunters, who will do anything to take down Hiccup and Toothless!

But the series doesn’t end here -- rumor has it that How to Train Your Dragon 3 is already in the works and it set to premiere in June of 2018, so we have a while to wait for that one. We are so excited to see what this new Netflix series has in store for Hiccup and his squad, but one thing is for sure, mystery and adventure await him!

Don’t forget to catch Dragons: Race to the Edge on Netflix on June 26! In the meantime, check out our YH Studio chat with HtTYD2 stars Kit Harington & Djimon Hounsou!