Step Into the "Warehouse" with Sci-Fi Starlet, Allison Scagliotti 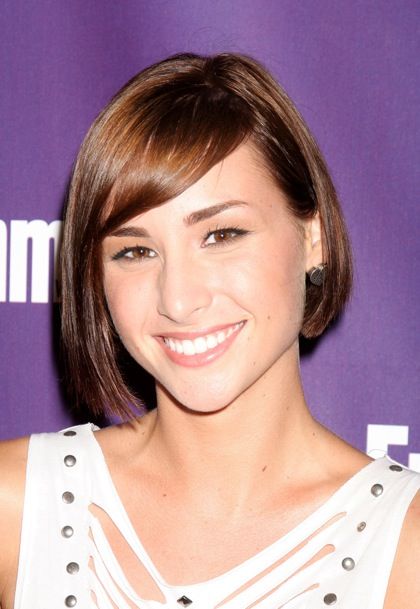 Words can’t even describe this remarkable actress and down-to-earth chick.

Her charisma shined over the phone as YH spoke to Allison Scagliotti from “Warehouse 13.”

Allison has been jumping around playing many different characters in her fresh-off-the-bat career. We get a glimpse of what it’s like being in her shoes...

Before the interview even begins Allison informs us right off the bat that she is watching the next episode of “Warehouse 13” after the premiere episode of season two aired a couple days before...

AS: I’m actually watching the next episode as we speak, number 2, called “Mild Mannered.” I think it’s already gearing to being a fan favorite. It’s very, like, super-hero-heavy episode. So, there’s hype, and it’s good hype.

YH: I can’t wait to see it. I know the premiere episode was a couple days ago [July 6th]. Did you do anything special for that night?

AS: As a matter of fact, while the rest of the east coast was watching the premiere, I was sitting next to Eddie McClintock [who plays Pete Lattimer], and we were engaged in a live online chat with over 700 people who logged on to Instant Message with us, so it was kind of a real-time commentary on an episode we can only hear over our really bad cell phone connection. [laughs]

YH: I know that Season One closed with Claudia being accused of taking objects and giving them to MacPherson, and her name got cleared at the end; however, she didn’t know… So, Season Two kind of opens with Claudia discovering who the traitor is, and now she’s just trying to cope with it all. What can we expect from her this season?

AS: Claudia’s got a lot of resentment towards Leena that she’s got to resolve, and Season One for Claudia was about finding her niche with this new group of people, this new family, having moved around for over a decade searching for her brother, and now her whole life path has changed. So, when she found where she fit among the furniture, Season Two is about proving herself. Her responsibilities are considerably heightened; she’s right there lending her hacking abilities to breaking cases and whatnot, but Claudia absolutely wants to do what Pete and Myka are doing — to be a secret service agent. Claudia just loves learning about the warehouse everyday. But, at the same time, her past is sort of haunting her. She has no past that she can speak about; it’s entirely top secret, which proves to be a complication when she meets a young lad...

YH: I’ve heard you might have this love interest coming up…

AS: Indeed. The character, Todd, is played by Mr. Nolan Gerard Funk, who is actually one of my very good friends, and this was our first time working together, so it was a lot of fun. He [Todd] also has a past that he can’t talk about, so when Claudia and Todd meet they have all these secrets that are kept from each other. It really complicates things.

YH: I know that Claudia is young, she’s hip, and she is this techno-wiz; is there a difference between you and your character?

AS: Well, the similarities between us are far greater than our differences. I bring my sarcasm, my wit, and my want to be loved and appreciated to Claudia. What I take home from Claudia is her style choices; I’ve actually learned how to dress better. [laughs]

YH: Yeah, I was just about to ask you, do you contribute any of your own personal style to Claudia, or is it just visa versa?

AS: It’s both actually. I’ve got a video blog out now about how to build the look. Every wardrobe fitting has been really collaborative between the designer and myself. I’m really into, like, strappy leather bracelets and rock-and-roll buttons and, like, layered jewelry, so we’ve taken sort of the skinny jean, v-neck aesthetic and funked it up — you know, the possibilities are sort of endless. When I start a new episode and I walk into my dressing room in the morning, there are these large stacks of different types of jewelry and, like, seven different belts, and there’s a lot for me to choose from. But I also bring a lot of stuff from home, like one time I wore a necklace my aunt made from me, custom, and it’s really beautiful. And I wore some Chuck Taylor’s that my friend Hannah designed for me, custom, and there is a YouTube video up about that. So, yeah, it's 50-50. I’ve definitely taken home some shirts, vests, and fun boots from Claudia.

YH: The characters you’ve played in the past -- Mindy from “Drake & Josh”, Jayna from “Smallville”, and now Claudia -- all their styles are different. How was the transition going from one to the other?

AS: You know, I’ve been really lucky to play interesting roles over my career thus far, and that has probably been my favorite part of it. Mindy was a smart girl, but she was obviously very buttoned up and preppy — but very real to me at that time too, because I suppose, at 13, I was rather tight-whipped too... [laughs] It’s really hard to imagine it was so long ago. And Janya from “Smallville” was just... I mean, that was just fun! To get to dress up like a cross between a koala and an anime character, it sort of just has this animalistic/superhero thing going on — it was a blast! And playing Claudia, you know, someone who is so close to my own heart, is really cool. The challenge with Claudia is that all of her insecurities are my own. So, when Claudia is worried about her surrogate brother and sister, Pete and Myka, all I have to do is look over to Eddie [Pete] and Joanne [Kelly, Myka] and think about how I care about them and make myself available to that feeling and let it show. And, you know, I think that is a challenge to most actors, letting their vulnerability of their real life shine through — telling the "Allison truth" in the concept of Claudia I guess.

AS: I think some did, and I think that I’ve picked up some new ones along the way, because on this live online chat that Eddie and I did, I threw a question out to the participants: I wanted to know how old everyone was, and our youngest was 11 and our oldest was 66, and we got everyone in-between watching with their families or with their loved ones or whoever. What I love about "Warehouse 13" is that it brings in a lot of demographic. It’s not limited to, you know, maybe pre-teens who would watch “Drake & Josh” or just straight sci-fi fans who would watch “Battlestar” or “Star Trek.” It’s a relatable, accessible show that has comedy along with all the thrills and chills.

YH: Are there any future plans, maybe going back to “Smallville”, or any other projects coming along?

AS: You know, they certainly left the door open over there at “Smallville.” There hasn’t been any official talk yet, but I would love to go back and step back into Jayna’s corset and turn into another wild animal; that would be super fun!

YH: You are going to be 20 years old; how do you have time for everything that you do career-wise and your studies?

AS: LOTS AND LOTS OF COFFEE!

YH: Do you have any advice for fans that are around your age who are trying to make it big and still deal with all the multi-tasking that comes along with it?

AS: You know, it's conventional wisdom, but sleep is so important. But in terms of getting into acting now, I would say this getting into any occupation: do it because you love it. Don’t do it to be famous, don’t do it for the money, don’t do it for the hype... there’s this sort of intangible feeling that I discovered when I was 5 performing on stage in school — this joy for putting on a show and telling a story and being in front of an audience or a camera. If that’s not there, then it’s never going to be there. You have to ABSOLUTELY love what you’re doing in any area, and I think that is the most important thing when you’re going after a dream.

Allison is sure heading in the right direction, and we can’t wait to see what she has in store for her future! Our convo continued as she told us about a crossover episode that will be happening with “Eureka” ...but we can’t tell you any details -- you’re just going to have to tune in every Tuesday night at 9:00 on Syfy to see what happens next to Claudia and everyone else from “Warehouse 13”!