Staying in for the Fourth? Here Are 5 Movies to Celebrate the USA! 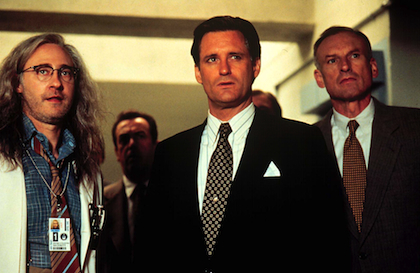 Ah, the Fourth of July, the perfect holiday to express how truly American you are by gorging on hot dogs, lighting fireworks, and getting a sunburn. If you’re like me and live by the beach, you get to see America’s finest pull up in trailers and put on a circus that rivals Ringling Bros. To escape this year’s mayhem, I have decided to hole up in front of my TV and catch up on some of America’s finest movies. Over the years, the good ol' U-S-of-A has produced some truly brilliant films, as well as a few that are just good old-fashioned fun. I present to you my list of the best movies to watch to celebrate ‘Murica:

1.Jaws: Set over the Fourth of July weekend,Jaws focuses on a man-eating great white shark that wreaks havoc on a charming beach town. Unsure of how to take the shark down, the local police chief (Roy Scheider) calls on the help of an oceanographer (Richard Dreyfuss) and a grizzled shark hunter (Robert Shaw). If you have any fear of the ocean whatsoeve, Jaws may be the film to blame. There is something terrifying about the ominous music that plays every time Mr. Sharky appears, and it is quite thrilling to watch the battle between Shark and Man. I have always thought ofJaws as a much more entertaining version of Moby Dick, as many of the themes are quite similar. Jawsalso had a rather troubled production, which has been documented endlessly over the years.

Jawsis available to stream on Amazon and Google Play.

2.Independence Day:Of course I had to includeIndependence Day! It is the quintessential Fourth of July film (and summer blockbuster film, for that matter). The plot is simple: aliens are coming to attack and the humans must hold them off. Starring a younger Will Smith as an Air Force pilot and an older Bill Pullman as the President,Independence Day includes the POTUS flying a fighter jet smack into a group of aliens. Laced with action stereotypes and special effects that still hold up quite well, Independence Day is a rather silly film that will make you cheer "USA! USA!".

Independence Day is available for streaming on Amazon, Hulu, and Video on Demand.

3.Magic Mike: Okay, technically there isn’t a whole lot about Magic Mike that screams the Fourth of July, but what better way to celebrate our freedom than by ogling some of America’s finest men? There isn’t much of a plot to Magic Mike, which follows Channing Tatum as a male stripper living in Florida who dreams of building his own furniture. He, alongside fellow stripper Matthew McConaughey (yes, he does strip), train newbie “The Kid” (Alex Pettyfer) to become a sexy stripping machine. There’s a love interest in there, and The Kid parties a little too hard, but the part you need to focus on is the men. There is more beefcake in this movie than there will be on your backyard grill tomorrow. Joe Manganiello plays a stripper named “Big Dick Richie”, Matt Bomer has a full stripping doctor routine, and did I not mention earlier that Matthew McConaughey strips? This is a film where every straught woman and gay man in American wins!

Magic Mike is available to stream through HBO, Amazon, Video on Demand, and Redbox.

4.Wet Hot American Summer:One of my all-time favorite films, Wet Hot American Summer is the ideal Summer flick. Set at Camp Firewood in 1981, the absurdist comedy follows the counselors on their last day of Summer Camp. The film features a slew of comedy stars before they were stars, includingAmy Poehler, Michael Ian Black,Ken Marino, Joe Lo Truglio, andElizabeth Banks (just to name a few). ThroughoutWet Hot American Summer, you will get to see talking vegetable cans, a cook (played by Chris Meloni) make sweet love to his refrigerator, and a mad dash to save the camp from a deadly piece of NASA’s Skylab.

Wet Hot American Summer is available to stream through HBO, Amazon, Video on Demand, and Redbox.

5.Rocky:Da-da-da-dum-ta-da! I am not sure how to type out the theme music to Rocky, but we all know how it goes and it's probably stuck in your head right now (you're welcome). Rocky is the ultimate embodiment of why America is worth celebrating. Sylvester Stallone plays the quintessential underdog who rises up and keeps on fighting thanks to the support of a few friends. During a fight for the title of heavyweight champion of the world (on the Fourth of July, no less!), Rocky keeps on fighting no matter how battered he gets.Rocky reminds us to always keep going no matter how many obstacles get thrown at us.

Rocky is available to stream through Amazon and Redbox.

What are some of your favorite Fourth of July movies?