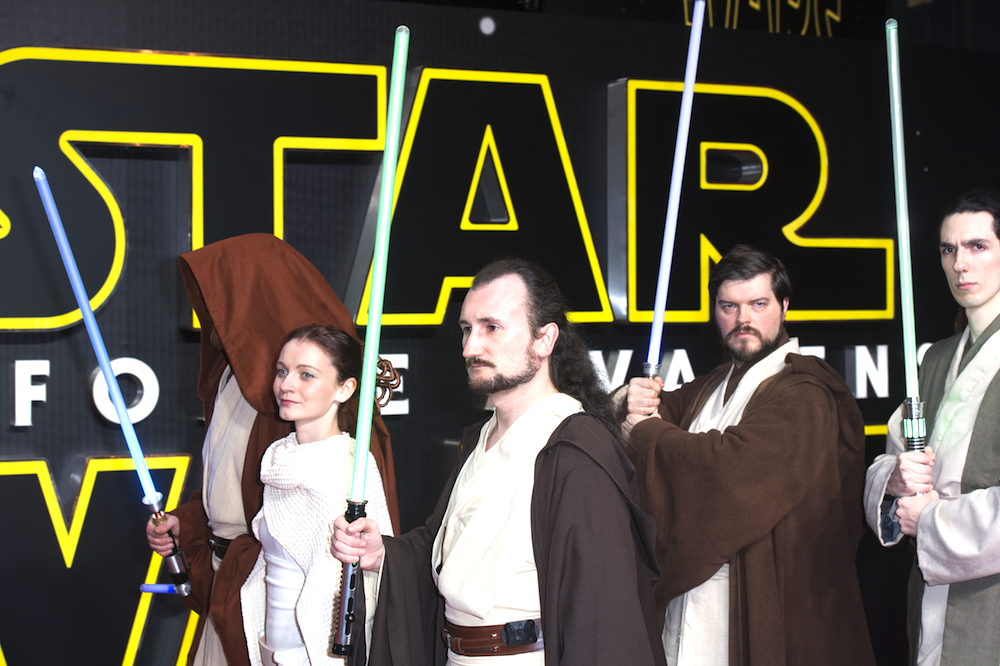 For the past few weeks, it feels as though no matter where you go or what you do, you have been bombarded with Star Wars! Every time I open Twitter, Facebook, and Instagram, the Star Wars theme song blasts in my head as I scroll through post after post regarding the series. The excitement is within reason -- Star Wars: The Force Awakens openstoday and has already sold $50 million dollars in ticket sales. All around the world, Star Wars fans have been celebrating the return of their favorite series. However, it’s not as though the mania is new -- this is just a long continuation of it!

When Star Wars: A New Hope was first released in 1977, George Lucas didn’t expect it to be a hit; in fact, he thought it would be a flop. Luckily, Lucas was wrong; not only was the film a smash, but the demand for toys was so high that they actually ran out during the holiday season. A number of fan clubs were formed, including The Royal Order of the Rebel Forces and Forces of the Empire, which is still in existence today. Fanzines, fan art, and even a Star Wars newsletter popped up. Fans yearned for an official Star Wars convention, but one was never formed, as Lucas had forbidden the stars of Star Wars from appearing at any cons where unlicensed merchandise was sold. This didn’t stop fans from holding their own conventions, though, where many showed up in costume (the early days of cosplay).

The fandom hit a snag after Return of the Jedi was released. Due to the lack of any new films, Star Wars fans faced a rather bleak period until the 1990s, where the internet brought fans together once again. Once the prequels were released, Star Wars fandom was back, and today, it’s bigger than ever!

To celebrate Star Wars: The Force Awakens, a number of events are being held all over the world. The biggest of course was the premiere of the film earlier this week, which shut down all of Hollywood Boulevard. Fans camped outside the theater for a good week in hopes of seeing a few Star Wars stars. Disney did them one better -- they didn’t just get to see the stars, they let them in to watch the movie! Celebrities proved that they love Star Wars too, especially Joseph Gordon-Levitt, who showed up in a homemade Yoda costume:

In addition to the premiere, a number of Star Wars events are being held. At the Discovery Times Square in New York City, a museum exhibit featuring the costumes of Star Wars is currently running, while in Vienna, another Star Wars museum exhibit is taking place at the Mak Museum. In downtown Los Angeles, a lightsaber battle will be held on tonight, where, for $10 (the money goes to charity), you can buy a lightsaber and then proceed to get into an epic battle (they will divide the crowd into Jedi and Sith). At Walt Disney World in Florida, guests who came to see the screening on the 17th were treated to an after -hours party at Disney’s Hollywood Studios. Both Disney parks have made this Christmas Star Wars-themed, where guests can meet their favorite wookie and experience a new version of the Star Wars ride.

Other more informal events will be occuring as well, to be sure. Everyone celebrates Star Wars in their own way!

Do you have any specific plans to celebrate the release of Star Wars: The Force Awakens?