Stanley Cup Up For Grabs in Epic East-West Showdown! 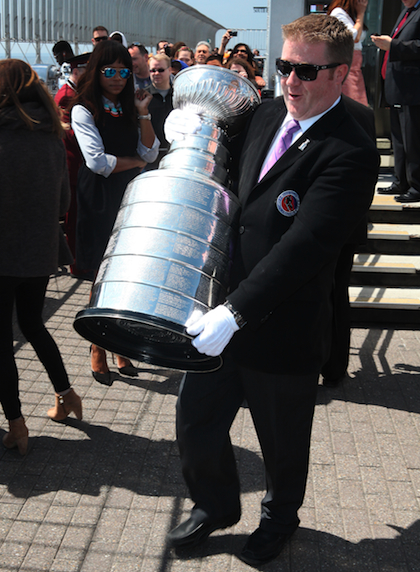 The Los Angeles Kings will be facing the New York Rangers starting TONIGHT in Game 1 of the NHL Finals!

More than just a playoff series, it's an age-old fight to determine “Which City is Better?” as these two huge, powerhouse cities continue a long-standing, epic, all-encompassing sports war, and this is just another battle. The two major cities have only faced each other in the finals 8 times in professional sports history, and this battle for the Stanley Cup makes it the ninth match-up.

Not that the Golden State hasn't found itself squaring off with the New York Metropolitian Area before, though. In 2003, the New Jersey Devils beat the Anaheim Mighty Ducks, and in 2012, the Kings won their first ever title against the Devils. But even if these counted, we'd still be stuck in a stalemate.

Each city has four wins over the other; five, if you include the hockey games. This Stanley Cup will not only crown the next hockey champion but also give one city the bragging rights until the next time LA and NY face off.

But back to this year’s Stanley Cup Final!

Game 1 will be at the Staples Center in a best-of-seven series. Although the Kings have the home ice advantage four out of the seven games, they’ve had a rocky road to the Finals. In the first round against their homestate rival San Jose Sharks, the Kings lost the first three games but rallied back to win the next four consecutive games, which is almost unheard of in any sport. Then, in round two against their other homestate rival Anaheim Ducks, the Kings won two, lost the next three, and were forced to have to win the next two games to stay in the race for the Cup! In the 3rd round, against the Chicago Blackhawks, they again had to force a Game 7, which they eventually won in overtime.

The Kings have had a crazy and exciting road to the Finals, and if they can keep up their determination and not give up, they have good chance to winning their second title in two years.

On the other hand, the Rangers had a back-and-forth series against the Philadelphia Flyers in the first round until Game 7, winning every other game. They had a strong start against the Pittsburgh Penguins in the second round but then lost the next three games, forcing them to have to win the next three games after that, which they did, thereby eliminating both Pennsylvania-based hockey teams. In round three, they had a fairly easier battle against the legendary Montreal Canadiens, winning in six games. However, the team’s star player Marty St. Louis has had a rough playoffs to say the least. He lost his mother on May 8 due to a heart attack. Surprisingly, St. Louis decided to play in the game the next day against the Penguins. They won that game and the next four after that. St. Louis’s loss, however, had a profound impact on the whole team. Seeing their teammate go through such a terrible loss brought them together and help propel them to the Stanley Cup finals.

Regardless of what happens this last round of hockey playoffs is sure to be an entertaining and intriguing battle and it all starts tonight at 5pm PST!