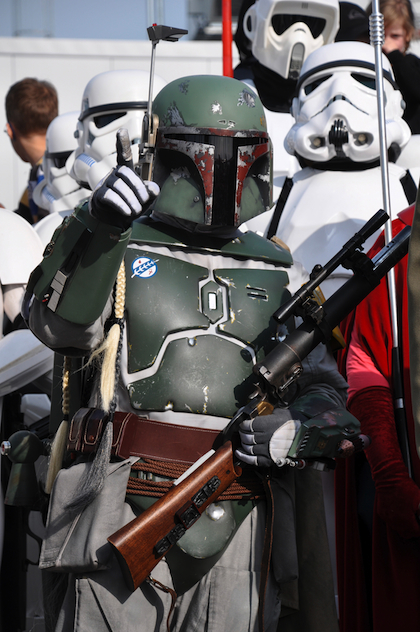 If a Boba Fett bobblehead sits on your desk, then I have some happy news for you: there is a very high possibility that the first Star Wars spinoff will focus on your favorite intergalactic bounty hunter. For those who need a quick refresher, Boba Fett is a recurring antagonist who was hired by Darth Vader to track down the heroes of the films. We first meet Boba Fett in Star Wars Episode II: Attack of the Clones when he was a wee bounty hunter being raised by Jango Fett (who, alas, was decapitated by Mace Windu). We last see him in Star Wars Episode VI: Return of the Jedi getting eaten by a giant monster. That’s quite a way to go out, if I do say so myself.

The new film, which is rumored to take place between either Star Wars Episode IV: A New Hope and Star Wars Episode V: The Empire Strikes Back or between Episodes V and VI, is set to be directed by the man behind the recent Godzilla reboot,Gareth Edwards. Edwards has stated that being able “to join the Rebel alliance” fulfills one of his lifelong dreams. He has picked Gary Whitta, screenwriter behindBook of Eli and a former video game journalist, to pen the mysterious script. Clearly, these two are have plenty of "nerd" cred, so I think we’re in good hands for this film. Neither has flat-out said that the film is about Boba Fett, but they have not denied it either.

Boba Fett is not the only character who may get his own film. Rumor has it that the next spin-off will focus on the origin story of a young Han Solo, although this has not yet been confirmed by the studio. Personally, I want to see a Chewbacca backstory. I don’t think he gets enough attention. Where would Han Solo be without Chewy?

Are you excited to see the spin-off?

UPDATE: We are now receiving reports that a second spin-off is in the works, this one focusing on our favorite loner rebel Han Solo! Apparently, the job of helming that film will go toJosh Trank, who broke out in 2012 with his superhero found footage flick Chronicle. It seems an apt choice, as Trank will be taking the reigns of the upcomingFantastic Four reboot. This guy definitely knows action flicks, and he already has some Star Wars cred under his belt thanks to a 2007 short film he made called "Stabbing at Leia's" (which you can watch here), so we're optimistic to see where this goes! Only question remains -- who on Corellia could possibly replaceHarrison Ford as a young Han??