'Spongebob' Sequel Will Be a True "Sponge-Out-of-Water" Story! 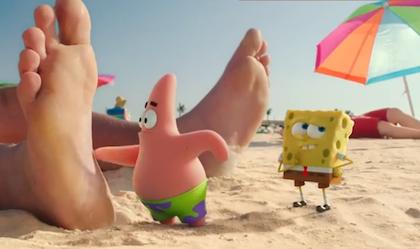 Normally, the characters of SpongeBob Squarepants wouldn’t stand a chance against a pirate on land, but with their acquired superpowers, the team has the courage to do anything. Might I add, these powers suit them as well. For example, SpongeBob is able to blow bubbles to capture items, and Patrick can shoot ice cream (although, according to the trailer, it seems he is easily distracted by eating his tasty weapon). In addition to having powers, SpongeBob and his squad are buffed up big time  Even tiny little Plankton is seen with a huge muscular body and a puny head that’s just funny to look at.

We can’t be too confident that SpongeBob will win the fight against Burger-Beard, though. Tom Kenny, the voice of SpongeBob himself, states, “SpongeBob only has two hours on land.” That’s two hours to get the recipe and defeat Burger-Beard — almost a mission impossible! And we all know how our favorite little yellow sponge can get totally side-tracked when it comes to missions; I don’t think getting tossed into Gun 'n' Roses lead guitarist Slash’s guitar case will help when it comes to staying on course...

Still, the fact that we will get to see SpongeBob with superpowers, ripped, and in live action is pretty cool. Don’t let the live action factor scare you away from this gem either, because just a 20-second peek at the trailer is enough to see that it will be one heck of movie. Too bad we have to wait to know if SpongeBob will be able to conquer the evil that forces him away from Bikini Bottom where he lives in a pineapple underneath the sea.

For a little taste in the meantime, be sure to watch the trailer.

Still not satisfied? Okay, then check out this video of YH talking to Tom Kenny at Comic-Con: