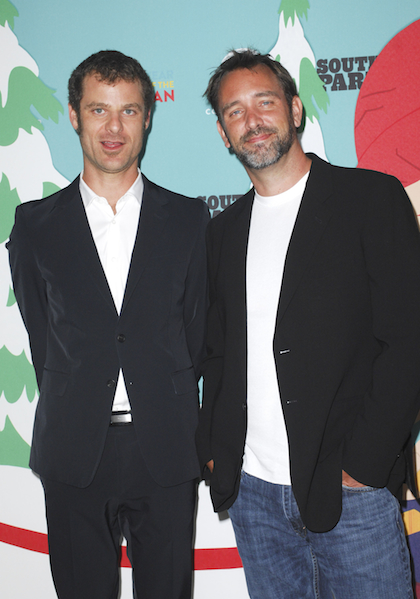 At first glance, the news of “South Park” creators Trey Parker and Matt Stone launching their own studio will likely elicit initial whispers of “uh-oh…” But then we quickly remember that these are the same guys who came up with the mega-hit Tony Award-winning Broadway show, The Book of Mormon. And even if you haven’t seen that stage musical, you’ve certainly seen South Park: Bigger, Longer, and Uncut, a song from which (“Blame Canada”) was nominated for an Oscar. An OSCAR, people!

It can’t be denied – as irreverent and controversial (and, some would say, inappropriate) as “South Park” can get, Parker and Stone know how to put on a good show. So, it’s actually rather exciting that they are creating Important Studios as an outlet for pursuing and cultivate other projects for film, TV, and even theatre, as they have more than shown themselves capable of dominating all three platforms. The Studio will be paid for with revenue generated from “South Park”, which has been on the air since 1997. The fellows revealed: “Having worked with several different studios over the years, we came to realize that our favorite people in the world are ourselves.”

Cheekiness aside, it’s true what they say: If you want the job done right, do it yourself. Parker and Stone have had a good amount of autonomy over the years, but now they have the clout to truly be their own bosses.

So, what’s on the docket for Important Studios? Well, none other than a film version of The Book of Morman is highly likely. Currently (still) enjoying its run in New York City, the musical makes about $1.6 million a week… yes, I said A WEEK. And with other productions running simultaneously in Chicago and, soon, London, the humble “South Park” duo will surely have enough extra cash to spend on these new projects.

Amazing what a little construction paper, a camera, and a warped sense of humor can lead you to, eh?