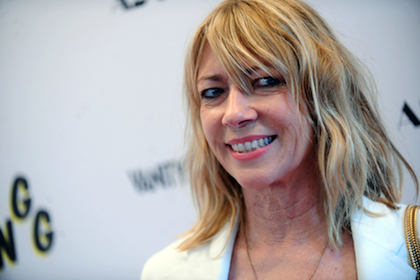 Sonic Youth is a band that had a career spanning three decades and continually churned out consistently good music with each album, which is very hard for even the most legendary of rock bands to do. While Sonic Youth’s experimental noise rock is definitely not for everybody, their former bassist Kim Gordon is putting out her memoir Girl in a Band on February 24, 2015, with Dey Street Books (a part of Harper Collins). If you’re a Sonic Youth fan, this will especially be a treat for you, since the band’s albums are also pretty autobiographical. They always played music based on their interests at the time, like the life and death of musician Karen Carpenter (see/hear below), and the life, works, and possible schizophrenia of author Philip K. Dick. Their second album Band Moon Rising sounds like it does because it was when the band was literally starving, living in the slums, and rumored to have recorded parts of it under a stairwell.

Even if you aren’t a fan of Sonic Youth, or don’t really even know who Kim Gordon is, you should still read Girl in a Band. Why, you ask? Well, if you’re a fan of music, this book will give you a glimpse into an internationally popular rock band, one that has kept their private lives closely guarded. The band has given interviews, and front man/guitarist Thurston Moore even did a punk rock version of "MTV Cribs" in the '80s but was largely sarcastic and funny through out it. Not a bad thing, but in the scope of people who need specific details on a musician’s life, he doesn’t reveal much. I have no idea if this interview saw the light of day before YouTube, but YouTube is where I saw it in three parts. Take a look at part one:

Moore is important to the book because, outside of being members in the band together, Gordon and Moore were married for many years and have a daughter named Coco. So, for the first time ever, we will get details on how Moore and Gordon met, started dating, got married, and eventually (assuming she’s ready to talk about it) find out why exactly they got divorced and devastated much of Generation X. After their initial separation in 2011 which led to their divorce in 2013, Sonic Youth announced a hiatus. They cited that the divorce broke the partnership of the band too, which had apparently always had a democratic approach to every decision, so when two members of the band are at odds, you can’t have democracy. Assuming that Gordon writes about the divorce, we will get to see how a partnership crumbles both personally and professionally.

Like all rock band biographies, there should also be some fun stuff about touring and drug use. To set the record straight, it has never been revealed publically that any member of Sonic Youth got strung out and went to rehab. What is prevalent in their music and solo artwork done by any of the members is that this is a band that loves hallucinogenic drugs, like LSD. I have no idea if Gordon will get into specifics about that, but the fact that nobody in the band ever went to rehab proves that this will be a different rock story than the autobiographies by, say, Motley Crue’s bassist Nikki Sixx and Red Hot Chili Peppers’s front man Anthony Kiedis.

But I’m leaving the most interesting angle of the book out! How could I have missed it? It’s right there in the title. Kim Gordon was the only girl in an internationally-acclaimed rock band, something that we’ve never read about and seldom hear about ever. When Sonic Youth started in 1981, being the only girl in a band looked more like a gimmick, but with the way Gordon handled herself and let her art speak for itself, she made it into a statement. Members from later girl bands like Bikini Kill, Sleater Kinney, and the insanely talented guitar-shredding goddess Annie Clark of St. Vincent have all said that Gordon laid the foundation for them. They saw that you can just be a girl in a band, make music and that your gender may find its way into your art but you’re still an equal. However, since she’s really the first woman and only woman in such an accomplished band, it’ll be interesting to hear first hand about what road life was like in a tour bus with a bunch of dudes.

As for what Gordon herself is up to in her post-Sonic Youth days, she’s been pretty busy. On top of the book, she released an album in 2013 with somewhat unknown musician Bill Nance called Coming Apart for their band Body/Head. Any fan of Sonic Youth (particularly their early work) will really enjoy this album. Gordon wrote it while trying to deal with her divorce and was listening to a lot of rap music to pump her up to face each day. (She does not rap on this album, though, sorry.) She’s also made guest appearances in Season 3 of “Girls” as the humorous recovering drug addict Mindy, and in “Portlandia” in a if-you-blink-you’ll-miss-her cameo.

Until then, check out Gordon honor her late friend Kurt Cobain as Nirvana was inducted into the Rock and Roll Hall of Fame last year:

(P.S. It's been reported that no male singers felt they could step up to the challenge of singing Cobain’s songs. Only women sung the songs on the night of Nirvana’s induction. Interesting!)