'Sin City: A Dame to Kill For' Makes Its Presence Known with First Trailer! 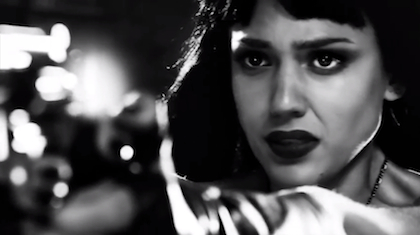 It’s been nearly ten years since Sin City came flying into theaters on a speeding bullet wearing lingerie. Rumors spread for years about the making of a sequel to the film, based on the graphic novel of the same name by Frank Miller. The rumors surrounding this sequel came in waves. Sometimes things looked great for a sequel and other times not so much. I even remember a time when Johnny Depp was said to be attached, but that never came to be. Luckily, filming is already done for Sin City: A Dame to Kill For! In fact, the film is set to be released on August 22! That’s less than a month away if you don’t know what today’s date is!

At the San Diego Comic Con this past weekend, the first red band trailer was premiered. If you weren’t there, or if you were there but couldn’t get into the exclusive Hall H, don’t worry, we at YH have you covered! (Slightly NSFW)

Black and white, plenty of lightened up blood, guns, knives, strippers… Looks pretty sick and twisted like the first one, right? We’ve got some new characters and the return of some old ones, includingBruce Willis returning from the dead asJessica Alba’s conscience. We also see Alba shaking her damsel in distress routine from the first film and suiting up for a good ol’ fashion revenge plot. She looks especially wicked with stitches on her face in a few of the clips, as well as in the poster. Mickey Rourke is back in full costume and make-up again as well, and Rosario Dawson threw on some gel for another Mohawky-type hairdo.

New to the sequel, we see actors Jason Gordon-Levitt,Josh Brolin, Ray Liotta, andJuno Temple. In case you didn’t catch it toward the end, the Mother Monster herself Lady Gaga even has a role in the film as a waitress, who, if I'm not mistaken, might also be a stripper. Who am I kidding? Of course her character moonlights as a stripper! Sin City, right??

So, there you have it. Sin City: A Dame to Kill For looks like it’s going to be a thrilling star-filled flick. I personally can’t wait for it. If you can’t wait for it either, remember, August 22 is just around the corner!