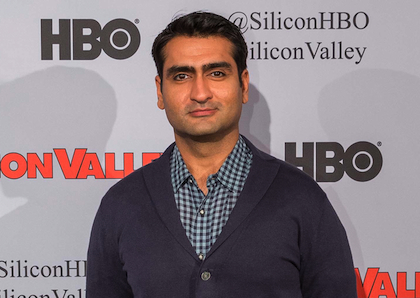 Don’t you just love it when a dream comes true? Well, one of the best working stand-up comedians today, Kumail Nanjiani, knows how that feels, and then some. Not only is he considered one of the elite stand-up comics, he is also a renowned “The X Files” fan, as evident by his podcast entitled The X Files Files, where he and a guest breakdown an episode of “The X Files”. Like many of us fans of “The X Files”, it’s safe to say he’s happy about the reboot (second dream come true), and now it’s been revealed that he will actually have a role on the show (third dream come true)!

I wish I could ask Mr. Nanjiani how it feels to have so many dreams comes true, but unfortunately, the last time I tried to talk to him, I became an awkward stuttering mess in his presence. (Kevin Donaldson: Professional Bridge Burner) But let’s just assume that he feels on top of the universe right now, which is how I’m sure Bill Murray feels all the time.

The details of Nanjiani’s role are pretty simple -- he’ll be guest-starring on an episode, and by his animal control outfit, it’s safe to say he’ll be somewhat of a bumbling idiot. Oh wait, you didn’t get to see a picture, did you? You’re in luck, because Nanjiani broke the news to “The X Files” fanbase by posting this tweet below accompanied with a picture of two very real people:

The lighting is weird because there is a UFO right above our heads. pic.twitter.com/uCW9kTyCJL

Believe it or not, the dream fulfillment doesn’t stop there for Nanjiani. He announced that the episode he will appear in will be written and directed by one of his favorite writers, Darin Morgan (fourth dream come true), known also outside of “The X Files” for his work on another popular science-fiction/government conspiracy show known as “Fringe”. Morgan certainly knows his niche in the science-fiction/government conspiracy television market.

Congrats on this one, Nanjiani, you lucky, lucky podcasting nerd. Maybe someday you can tell us how it feels to not have just one but FOUR dreams come true (in case you didn’t notice, three out of four have to do with “The X Files”). Until that day comes, we’ll be eagerly awaiting the return of “The X Files”, especially your guest-starring episode! We will also happily reminisce on our chat with the funnyman at SXSW: