Marvel's 'Ant-Man' Delivers, But In Ways You Might Not Expect! 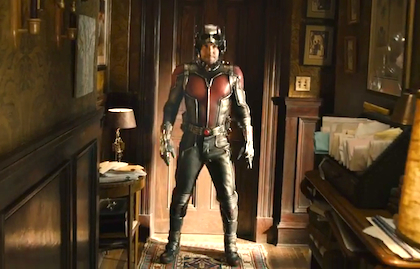 Well, Marvel has done it again, and honestly, they’ll probably continue to do it until they get down to the likes of The Kangaroo. They’ll probably stop there... or not. I am, of course, referring to the fact that Marvel Studios has once again expanded their little universe with the release of Ant-Man, a film that movie insiders and comic book fans alike have been talking about for what seems like two Ages of Ultron now, and one that the general public probably hadn’t heard about until the marketing gods opened their floodgates months ago. The first question on everybody’s minds will undoubtedly be if Michael Peña is as hilarious in the film as he is rumored to be. And the answer is: yes, he’s pretty funny in this film. In fact, his charm goes a long way to helping Ant-Man establish its own identity within Marvel’s ever-growing cavalcade of kooky characters.

Honestly, though, the marketing gods that I referred to earlier did no favors for this movie early on when the first trailer and snippets of the film were being released to the public. All those promotional spots really did were highlight the highly tread-upon territory (in terms of story) that Ant-Man was planning on... treading upon. So, for the folks out there looking for Marvel to show them something new, the initial peeks into this world might have left them somewhat empty. But Ant-Man the Film, not to be confused with Ant-Man the Trailer, had a tiny little ant-sized ace hidden up it’s sleeve.

There have been a couple of picnic puns scattered about the fields of the Internet in regards to this film, and as painful as they might’ve been, they are not entirely inappropriate, for Ant-Man is the first “rural” Marvel movie. When I think of Ant-Man, I think of quaint little neighborhoods, winning stuffed animals at the county fair, and, of course, picnics. Basically, Marvel has made a family film, and while families have certainly enjoyed every other Marvel movie to date (even Thor 2), this one truly feels tailor-made for weekend outings at the local cineplex and movie nights in the living room in front of a roaring fire (or a video of a roaring fire). When the film is not torturing baby lambs and disintegrating doubtful executives, it is plying its audiences with humor that ranges from blunt gags of immediacy to more drawn out and playful shenanigans. Most everything in this film is done with a wink and a smile, which never diminishes the excitement during the shrunken action, of which there is plenty. I gotta say, there’s more shrinking in this movie than a weekend bender involving Wayne Szalinski (Google it, children).

Obviously, part of the appeal of Ant-Man is a new superpower not yet seen, and said power is displayed grandly and thoughtfully throughout the film, as the filmmakers have great fun with scope and perspective and truly allow audiences to get immersed in that fun to a point that, thankfully, never becomes stale or dizzying. The scene below is my personal favorite, as it allows you to really experience the world from our tiny hero’s point-of-view. The train fight towards the end achieves this as well, despite the slight overuse of a particularly funny gag.

A movie is a complex machine, and if one part of it fails, then the machine can still run as long as the other components sufficiently compensate for the loss. This analogy is appropriate, seeing as how our hero is an electrical engineer. I was going to go for an ice cream-based analogy because of the Baskin Robbins bit in the film, but I feel I’ve made the smart choice here. I bring this whole machine thing up because, while the story in Ant-Man is a recycled amalgam of hundreds of previously done stories (many from Marvel’s own camp), it is saved and elevated due to its nicely-timed humor and the fine performances from our cast. Michael Douglas brings pathos to the role of Hank Pym, the original Ant-Man-turned-mentor to Scott Lang. Douglas gives no more or less to this role than to any other he’s ever played, and this in turn gives shape and form to the more somber side of this film’s soul. Evangeline Lily plays the role of the angry daughter well, and while it is not the meatiest of roles, her investment in it will hopefully pay off down the line with a more substantial part in this universe. Corey Stoll portrays the villainous Darren Cross, and while the role is somewhat of a rehash of Obadiah Stane from Iron Man, Stoll injects it with enough emotional energy to give you the idea of a larger and more complex character underneath. And then, of course, there is Paul Rudd. Everyone’s favorite star from Halloween 6 (his portrayal of Tommy Doyle is unrivaled) is in top form as our main protagonist, and the humor, heart, and determination he brings to the role is essential. Mr. Rudd makes for a great hero, and in the coming months, we’ll see how he does as a team member, as his induction into The Avengers is a foregone conclusion.

Marvel’s tiny little superhero film has currently climbed to the top of the box office mountain and has planted a cute little tiny flag to show that it’s there to stay for a while. Ant-Man is a fun and lighthearted affair which differs greatly from every other Marvel movie, despite having the same plot as every other Marvel movie. It’s a film enhanced by its talented and committed cast and skillfully-crafted humor, and one that is easily deserving of a view on the big screen.