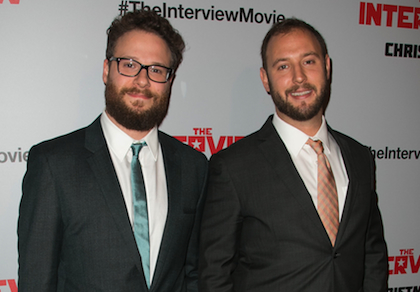 So far, the details on the plot aren’t the most concrete, but it might not be super duper finished yet. We do know that joining Rogen and Efron will be actress Rose Byrne, reprising her role as Rogen’s wife from the first film. We do not know for sure if Dave Franco will be back for more or not. Remember, his character seemed like he could end up being pretty successful someday. Aside from Byrne reuniting with the rest of the cast, there will be even more of a female presence going on in this sequel. Instead of fighting off a frat, this time Rogen and friends will be fighting off -- WAIT FOR IT -- a sorority!

How would it be that a chubby stoner and a man who looks like “something a gay guy designed in a laboratory” (as Rogen said about Efron in the first Neighbors) would find themselves in the same situation of wanting to get rid of a neighboring Greek house? Efron’s character wasn’t portrayed as the smartest cat, as he was told he was too dumb for a job at a job fair, so could he really be living in the same neighborhood as Rogen’s character? Maybe Efron is rooming at Rogen’s house because Rogen and Byrne are having trouble paying off their mortgage? Maybe Efron makes money off of some app? Maybe Efron lives with roommates in the neighborhood? Perhaps Rogen hooked Efron up with a job in his company that looked like it was made of cubicles? The cubicle ocean is not always the best sign that you’re making a lot of money. But I guess we can stop guessing and just guess that this will be part of the fun of this film.

Now that we’re good on not guessing about the future, let’s take a look into the past. Take a look at all the time we spent with the fellas of Neighbors at last year's SXSW: