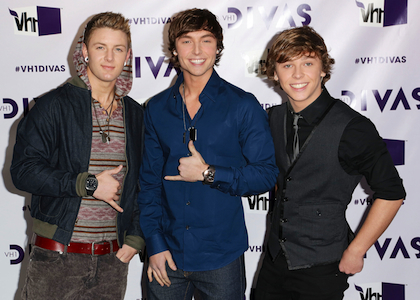 Two of our favorite musical acts are joining forces! It has just been announced that Emblem3 will be joining Selena Gomez for her Stars Dance Tour later this summer, and we couldn't be more excited to see these two (well, four) come together!

Say the boys: “We’re so psyched to be touring North America and Canada later this year, hitting a bunch of cities our fans haven’t seen us in yet. We’ve been looking to get back out and couldn’t think of anyone more dope than Selena to do it with. Gonna be a fun ride!”

Along with giving their fans far and wide a chance to see them up close, E3 puts themselves in a much better position for a solo tour in the very near future. We're so excited for them!

In the meantime, E3 and Selena will finally get a chance to become acquainted this weekend at the Billboard Music Awards - no, they have not met yet! - and we know of one thing straight away that the all have in common to talk about... Demi Lovato!

The Stars Dance Tour kicks off in Vancouver on August 14. Start saving your pennies now, Emblemers! Our boys are moving up in the world!

In the meantime, catch up with all the goods we've had with Drew, Keaton, and Wesley, below!