'Searching' Pushes The Boundaries of the Found Footage Genre In The Internet Age! 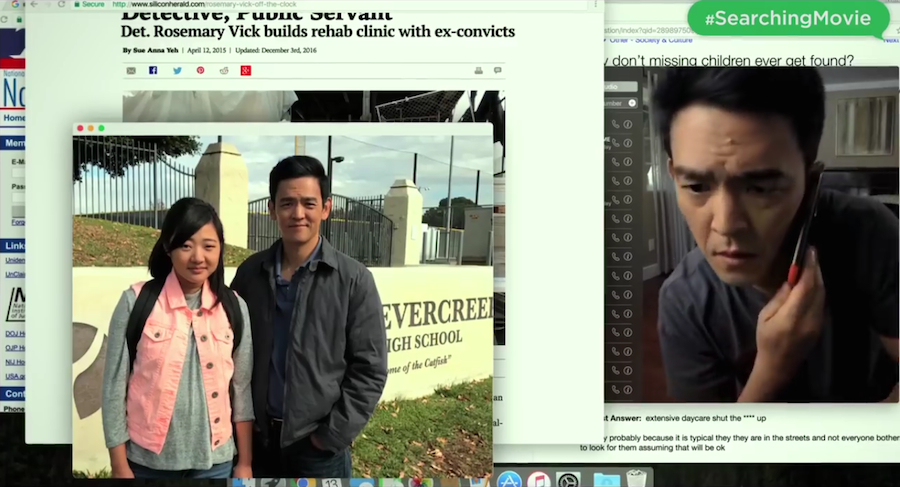 The found footage style of filming has been a favorable storytelling vehicle in horror and thriller movies for decades, allowing for interactive perspectives and low budgets. Despite not being the first film to utilize this technique, 1999’s The Blair Witch Project is credited for elevating it into popularity among production companies and independent filmmakers alike with the film’s incredible box office success. The past few years have taken this a step further, creating a subset of found footage that uses computer and phone screens to tell a narrative. Between webcam and video chat features, messaging apps, and web browsers, films like 2014’s Unfriended have been able to illustrate tales that turn laptops into vital characters. After all, our technology is an extension of our brains. The latest film to feature this format is titled Searching, and its international trailer was just released.

Directed by Aneesh Chaganty, the film follows a father named David (John Cho) as he attempts to piece together information on his missing teenage daughter, Margot (Michelle La), through her Internet history. Although having a parent go through your online information appears to be a nightmare in itself, the true horror is felt by David as he realizes how little he knows about his beloved daughter. As he sifts through her accounts, he finds Venmo payments worth thousands of dollars, realizes that no one on her friend lists actually knows much about her, and that she canceled all of her classes months before her disappearance. The mystery surrounding Margot’s whereabouts, hashtags that seem to blame David, and the premise of a parent realizing that their daughter is a stranger create a gripping trailer.

While the film isn’t set to release until August 3, it already premiered at Sundance Film Festival and currently has a stunning 100% on review site Rotten Tomatoes. Top critics have hailed it as a “roller coaster”, saying that the format has been able to push past its gimmick to create an engaging, effective story. It also just won the Audience Award at the Los Angeles Asian Pacific Film Festival, which is significant. Research shows that only 1 out of 20 speaking roles go to Asian actors, and only 1% of all lead roles are given to Asians. However, the Asian community, which is currently celebrating Asian Pacific American Heritage month throughout May, is pushing for more representation. Television shows such as "Fresh Off the Boat" and "Crazy Ex-Girlfriend" have been noted for their portrayals of Asian families, and with the August release of both Searching and Crazy Rich Asians, there seems to be hope that diversity is slowly but surely underway.

As we enter the countdown to Summer, the excitement for this film grows. This thriller is sure to deliver an anxiety-inducing experience, showing just how much one can figure out about somebody through their web history.