"Scooby-Doo" at Comic-Con '16: Teaming Up With WWE 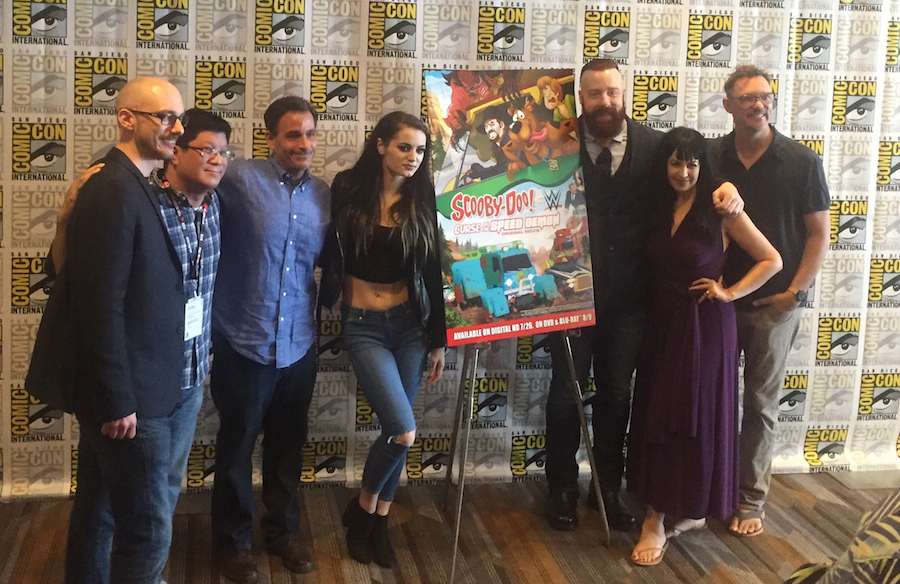 Scooby-Doo! & WWE: The Curse of the Speed Demon is the second film in which the Scooby gang and the WWE superstars team up, entering an off-road racing competition and encountering a menacing phantom (who has his own wild racing car, naturally). Scooby-Doo and pals, alongside WWE superstars Sheamus, Paige, Goldust, Rusev, as well as Scooby’s new driving partner, the Undertaker, must save the day before it’s too late! The film will be released on August 9, right before WWE’s epic SummerSlam.

The cast and creators of the forthcoming film congregated at San Diego Comic-Con where we were able to get the scoop on this epic re-match!

GG: What’s new, Scooby-Doo? [laughs] Well, I’m excited to be back at Comic-Con. Last year, we did the KISS one, and that was a frenzy. This one is too, just with different guests. WWE and Scooby-Doo seem to mesh quite well. I’m always excited to do these WWE things; I have two brothers and they’re always like, “Oh my God!” They know about it before I even record. It always gives me a lot of crediblity with the male members of my family.

YH: How was it working with the wrestlers?

GG: It’s been great! All my guy friends are texting me about Paige, and I’m trying to set Sheamus up with my pretty friend. He says that he can’t meet women because he travels all the time, so I’m going to fix that. I’m a total matchmaker. Anyhow, the wrestlers were good actors. They were fantastic.

ML: I think they’re great! They’re all full of energy and they’re so charming. They are playing into what they do. They’re super lovely.

YH: There have been so many Scooby storylines. Is there one you would like to happen that hasn’t happened yet?

YH; If Daphne were to come to Comic-Con, what do you believe she would cosplay as?

GG: The most elaborate fashion thing ever. She would be building her costume for at least two years, bring in a lot of experts to consult on it, and it would be very sparkly and purple. It would be amazing. [laughs]

YH: If Shaggy were to come to Comic-Con, what do you believe he would cosplay as?

YH: Grey, How would you say that Daphne has changed over the years?

GG: I’m kind of a sarcastic, snarky person, and I would have to say that Daphne has gotten more sarcastic and snarky since I’ve been playing her. I behaved myself the first four or five times I played her, but now I’m like, this part is mine! [laughs]

YH: Grey, What do you feel you have in common with Daphne?

GG: I’m a super girly-girl and I love fashion and dresses. I am all for equal rights, but I do love to get my nails done! And until I got married, I was always in love with guys that didn’t want anything to do with me. I feel like she’s always had this unrequited crush on Freddy, where he’s just such a clueless idiot. That was me until I met my husband. [laughs] 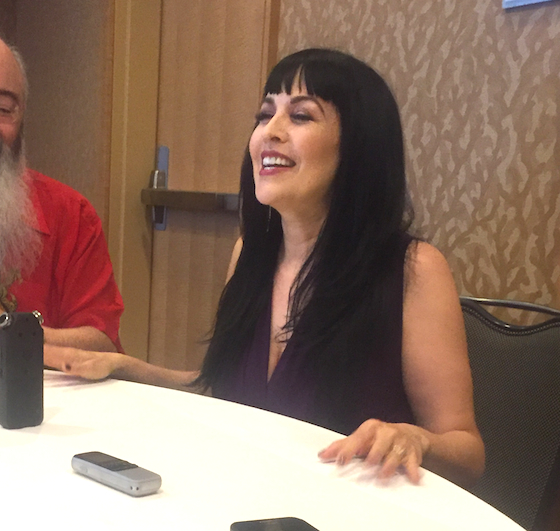 YH: Matthew, How do you feel that Shaggy has grown?

ML: I feel that every creative director has their own take. Certainly “Mystery Incorporated” was much different from what we are doing now. I feel that the TV show and the DVDs do vary a bit. Our job is to faciilitate what the writers want. What we are doing now is very Groucho Marx based on the way they write it. It’s quick and fast. Every creative director wants to take their take on these stock characters. Some of them I like better than others, but my job is to give them what they want.

YH: Do either of you prefer live acting to voice acting?

ML: Well, with live-action, you can use your body, your face, and your voice. Every single articulation of your body is part of the storytelling process. In the booth, the crazy thing people do not understand -- and what I think is missed in casting animated films now -- is the ability that voice actors have, is unparalleled. Just because you are a celebrity and can get on a late night show does not mean you are good at voice acting. Voice acting is a talent. It’s a craft that is not understood by people making animated films today, in my opinion. If you look at the actors that come through our booth once a week, they are incredibly talented, and what they do cannot be duplicated because they have a lot of twitter followers. I watch these things, I have three kids, and if you get a flat performance, there is nothing any animator can do to save that performance. It’s sad that our industry is so based on results instead of process.

YH: Are any of you a wrestling fan?

BV: Yes, I am. Originally, back in the '80s, there was a big push when Wrestle Mania began, and I think just on and off I’ve been a fan. I am a big Undertaker fan, because he brings such theatrics. I got to really come into this with our first WWE movie. That was awesome because I got to work with John Cena and all the superstars in that movie as well.

TD: I am a big wrestling fan. I was really hoping for Goldust and Stardust, and we got them. I felt like I arrived. I really wanted them.

YH: What was it like to pick the wrestlers for this movie?

BV: Being a fan, I couldn’t help but to submit a list to WWE, as I had a few requests myself. [laughs] WWE wanted some of their particular guys involved, and so we worked back and forth on a list, and once we got a list, we came up with a script.

BV: Oh no. It’s all WWE superstars that you see in the race. There are some really crazy car designs, but it does feel like “Wacky Races”. We teamed them up in interesting ways. We got to make tag teams. We have Lana and Rusev in one car, we’ve got Sheamus teamed up with Stardust and Goldust, Paige teamed up with The Miz, and the Undertaker with Shaggy and Scooby.

YH: Tim, what were your thoughts when you were first presented this project?

TD: At first, I thought, “Oh yeah? You’re going that way?” But I knew that they wanted to do something different for the second one. I didn’t know if they were going to give them a bigger bad guy to wrestle or a bigger ghost. After they were talking to WWE, they came up with the racing idea. I figured they could still be themselves, but since I’m a fan of “Wacky Races”, I decided we could do this.

YH: Were there any challenges to animating a real-life person?

TD: There is. They have very signature things that they do with their body language. We tried to put in as much of that as we can, and we try to give the animators as much reference. We give them lots of clips. We make little sketches and notes on what this guy does before this move or what he does with his eyebrow before this. We tried to put that in as much as possible, albeit with time and budget permitting. I think fans will recognize those little mannerisms.

YH: Paige, What was it like to translate your wrestling facial movements and mannerisms into animation?

P: It was very difficult because I don’t come from that world. I come from the wrestling world, where you wrestle in front of a 100,000 people to being in a booth by yourself, talking to yourself. But luckily you have the director and the producer in your ear telling you if you sucked or not, and they help you in the process. It’s definitely a tough transition. I had a lot of fun with it. I just did Surf’s Up 2 and hopefully I will get to do some more.

YH: Were you a fan of animation growing up?

P: I’m not a cavewoman. “Scooby-Doo” was one of my favorite cartoons growing up. I was actually going to discuss what animation I would like to be in next, and I like adult animation. I like “Family Guy” and “South Park”. Maybe something like that in the near future would be fun.

BV: Yes. “Scooby-Doo” and “Super Friends” were the first cartoons I remember watching. That’s what really drew me in. I was at the right age in the '80s for “Transformers” and “Thundercats”.

YH: Paige, have you seen your animated character?

P: I have! It’s on the freaking cover. I didn’t even realize. I thought it was Stephanie, and then Sheamus pointed out it was me and I Home-Aloned it. I was just like “Whaaa?”

YH: Is it a bit weird to voice an animated character that is you?

P: It was really cool, just because it is “Scooby-Doo”, which is one of the most iconic movies and shows of all time. Being a part of that was insane, and then being Paige was insane. My mum and dad -- my mum’s ovaries are exploding and my dad’s puking rainbows. It’s incredible.

YH: When they showed the concept of the film to you (that it is a racing movie), did you wish that you could do this in real life?

P: Oh I always wish that I could do this in real life. That’s way more exciting than what I do when I’m at home!

YH: Is there a “Scooby-Doo” character that you relate to?

P: In terms of awkwardness, I would say Shaggy. I’m very awkward at times. I’m not into the "Scooby snacks" like he is though. [giggles] 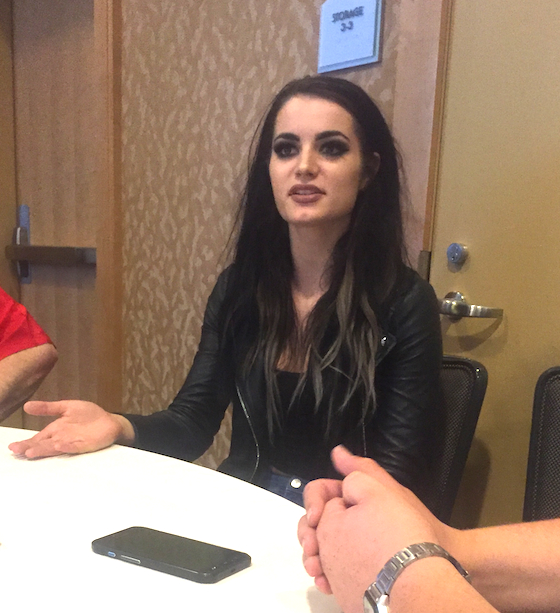