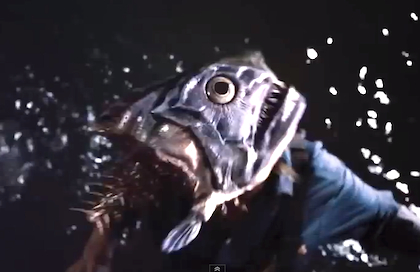 The leaves have begun to change colors, the air is getting colder, they are selling giant pumpkins at my neighborhood Trader Joe’s… October is here! To celebrate my favorite month and what may be my favorite holiday, Halloween, I have decided to review truly crazy horror movies for the rest of the month. I adore Halloween -- any holiday that encourages candy, costumes, and horror movies is alright by me! I debated reviewing actually scary horror movies, including a few of my favorites, The Orphanage and Misery, but then I decided it would be a lot more fun to review our favorite cult horror movies.

My boyfriend helped pick the first film in my series: Piranha 3D. As we sat down to watch the film, he explained to me that Piranha 3D is essentially a B-rated/camp version of Jaws with more blood, worse effects, Adam Scott, and BOOBS! About fifteen minutes into the movie, I completely agreed with his assessment (except that I think Adam Scott popped up a little later, and that most of the film is, indeed, boobs!).

The plot alone of Piranha 3D is enough to make you chuckle: when a supposedly extinct species of piranha is released thanks to an earthquake, they proceed to wreak havoc on Lake Victoria during a wild and crazy Spring Break! Our main hero, Jake Forrester (Steven R. McQueen), must help save his little sister and brother, as well as his crush, from the man-eating piranhas all while helping film a soft-core porn and admiring lots and lots of boobs! Thankfully, French director Alexandre Aja realized how ridiculous this premise was and proceeded to go completely over-the-top with it. My favorite performances came from Jerry O’Connell, who plays a "Girls Gone Wild"-type sleazeball director who ends up meeting the worst fate of the film, and Adam Scott, who portrays a serious scientist who jet skis through the vicious piranhas to save a bunch of half-eaten party-goers. (The determined look on Scott’s face as he attempts to save the eaten victims made me laugh hysterically. I know. I’m terrible.) Richard Dreyfus, star of the original Jaws, has a fantastic cameo in the beginning (I’ll let you see for yourself exactly what happens to him), and Christopher Lloyd plays an even crazier version of Doc Brown from Back to the Future (this Doc happens to be a ichthyologist).

Sadly, I did not get the chance to see all of the gore and terrible CGI piranhas in all their 3D glory, but I have been told that the original 3D version presented guts, barf-flying, and... you guessed it... BOOBS! All in high tech 3D. I couldn’t help but bust a gut at the sheer insanity of the piranhas ripping these outrageous partiers to shreds, yet also feel a little bad for the actors who were doused in fake blood (I have been covered in fake blood before while working at a haunted house; it takes forever to wash off). Despite how utterly disgusting the film is, it never ventures into torture-porn; Aja has a real knack for balancing cartoonish horror with comedy.

If you absolutely adore campy B-movie horror pics, then I suggest inviting your friends over to watch Piranha 3D immediately. If you can’t stand absurd amount of blood, irritating party animals and giant BOOBS, then this isn’t the film for you.