Q&A: 'We Made This Movie' Star Michael Charles Roman 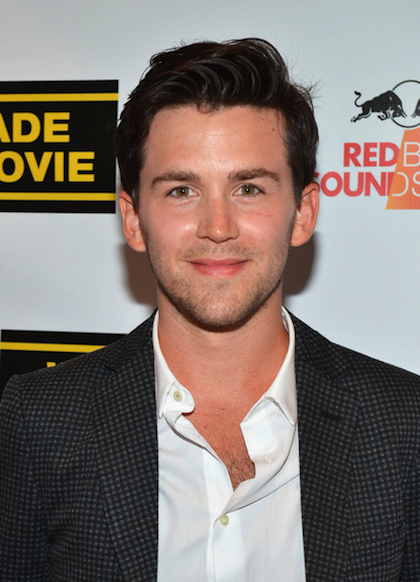 The entertainment industry is nothing new to Michael Charles Roman. In fact, he’s been a part of it for over 2 decades… And did I mention that he’s only 24 years old?

Roman’s extensive resume includes films, pilots, television series, commercials, and, most recently, a leading role in a film by executive producers of "The Late Show With David Letterman", Rob Burnett and Jon Beckerman. We Made This Movie follows a group of high school kids who decide to make a film, in hopes that fame will get them out of their small, depressing town. They hire some freshmen to follow them with cameras, only to realize that their own lives are much more compelling than the silly movie they intended to make.

The film is only being released digitally and showcases a cast of fairly unknown actors, Roman being one of them. Though he has been on the scene for quite some time, he is finally getting the attention he deserves. We got the chance to talk to the actor fresh off of his first appearance on "Jimmy Kimmel Live!":

YH: You began acting and auditioning at such a young age. Was it your parents' idea to put you in the business?

MCR: It was 100% mine. I would beg my mom to introduce me and I’d do shticks to our living room couch; I would come out and practice my curtain call. Around 4, my parents knew that this was it for me. I had an "old soul" mentality, and they believed in me.

YH: How did you manage having a childhood while being a professional actor?

MCR: We found a great balance. I would go to school half the day, then go to auditions in the afternoon, and do my homework on my train. I call it the Separation of Church and Ego. It took me a few months to get my first gig, and then it spiraled from there.

YH: Tell us about the audition process for this role.

MCR: I moved out here when I was 19, and after about 2 years, my mom got sick and was diagnosed with bladder cancer, so I moved back home to help my family. She passed after a very arduous 2-year battle. I called my agent and asked if there were any auditions, because I needed something to avert my attention. They told me that there was an audition for an untitled comedy.

YH: Did you have any idea that a year later you would be a guest on "Jimmy Kimmel Live!"?

MCR: No! It was funny; originally, there wasn’t even a title attached to the project.

YH: We Made This Movie is different than anything we’ve seen before. What do you think people will take away from this film?

MCR: It’s an entirely original concept, and it has something for everyone. It has the jokes, it has the humor, it has the gags, but at the end, it has a lot of heart. Today, everyone wants their 15 minues of fame, and these kids think, "Why not?"

YH: Tell us about your character, Smitty.

MCR: Smitty is the Vince Vaughn sarcastic type He’s the black sheep of the group, but it’s later revealed that this may be a façade for what he is dealing with at home. Towards the end, you see a different side of Smitty in a very emotional funeral scene.

YH: Smitty evolves so much throughout the film. What was it like playing a character that shows such a wide range of emotion?

MCR: I always try and work from a place of real and honest and not have any staged moments, and I try not to feel the presence of the camera. Often time, people feel they need to "act" once they feel the camera is on them, and for this, I had to do everything in my power not to do that.

YH: You have been in this business a long time and have definitely seen how difficult it can be to make it as an actor. How do you stay motivated and inspired?

MCR: I’ve always said, and it might sound cliché, but I really believe that this is the air I breathe. The acting, the entertaining and just performing… it’s what I truly live for. It can be difficult to stay sharp and can become a problem when there’s a lull in terms of auditions… the minute I’m thrust back into it, the excitement is never at a low. Simply reading a script, I just hunker down and dissect it, and that’s what’s really fun for me.

YH: It is clear you take your craft very seriously. Are there any actors who inspire you?

MCR: In terms of comedy, I look at the great Michael J. Fox. He is always very real in the way he delivers a line. He always has a bit of a smirk and a likeability to him. Obviously, the old classics of [Robert] De Niro, [Al] Pacino, and Dustin Hoffman. Today, I love Ryan Gosling. I definitely aspire to have that kind of success while also doing my own thing.

YH: Is there a character that you have always dreamed of playing?

MCR: I have a writing partner, Alex Greene, and we have been writing a script for about a year-and-a-half. I would love that all-encompassing role of having creative control while also starring in the part. The part we are writing for me is the young brash lawyer with many different layers. He has a hint of vulnerability but he is not going to show that to the rest of the world.

YH: If you weren’t an actor what would you be?

MCR: I’m a golf enthusiast, and I always thought it was so cool and unique to be a course designer or a professional golfer. It’s the best of both worlds!

MCR: I love all things Batman and I always have, I think he embodies it all.

MCR: I passionately love Dave Matthews and have all my life. I have all of their live stuff. That’s always what I put on when I run.

YH: What is your guilty pleasure?

MCR: Apparently it’s a good-fattening, but I can eat gallons of hummus. I know to some that sounds repulsive but I get cartons full of hummus and I cannot stop myself.

You can check how to download a copy of the film for your viewing pleasure via the We Made This MovieWebsite!