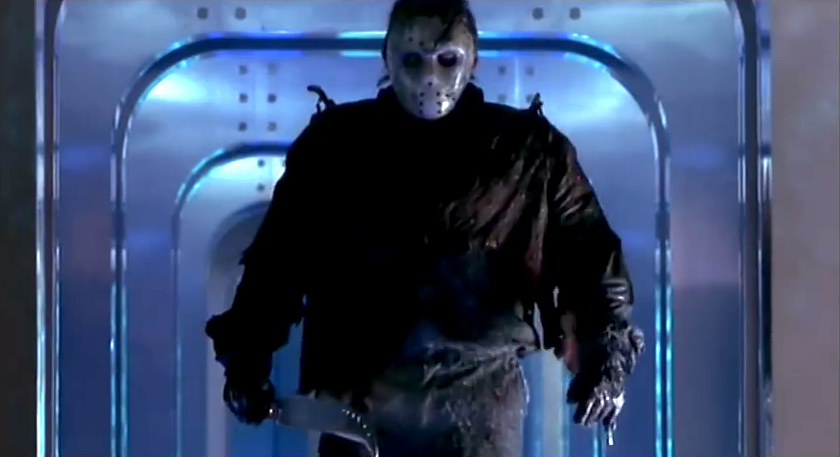 As Halloween is a few weeks away (and I still haven’t decided on a costume!), I decided to review a true horror gem: Jason X. The tenth installment of the indestructible Jason Vorhees series may be its most ridiculous -- and therefore, the best one. It’s rather difficult to tell whether or not Jason X is meant to be a comedy (my hope is yes), but we do know that the film first began as a loose suggestion in order to promote Jason while Freddy vs. Jason was in development. There were a number of places the directors could have taken Jason, but they settled on space -- specifically space in the future -- where Jason could encounter futuristic devices to make him even more terrifying.

Jason X is anything but terrifying. I think the best term to describe it is hilarious. In the first five minutes of Jason X, I had absolutely no idea where Jason was, nor why he was being frozen, nor does anyone attempt to explain this. That fact, combined with acting on par of a high school production of The Crucible, let me know that I was in for a good time.

From what little bits I was able to comprehend, Jason is set to be frozen (since he can’t die?) and, of course, this being Jason, he escapes and proceeds to kill everyone in a glorious bloodbath that could rival the Red Wedding. He and Rowan (whose relationship to Jason is never explained) become trapped in an ice chamber where they are frozen. Flashforward 450 years into the future, where we meet an oddball group of students and their confused professor. Apparently in the future, midrifts, low-cut tops, and '90s rave wear are en vogue once more, as well as stoner wear (the type worn by white kids with dreadlocks who discovered Bob Marley last month). However, when one is aboard a ship and scourging for dead bodies (as you do), one must wear a ratty version of the Star Wars sand people's ensembles. The future also includes tons of witty banter and zingers and detailed descriptions of things, such as:

“I’m bitchy as hell when I wake up”

“Somebody get those clothes off of her!”

“I could never be with a girl whose balls are bigger than mine.”

After the characters regale us with such clever remarks, they unearth Jason as well as Rowan. Despite Rowan’s protests that Jason is Jason, the crew decides that everything will be fine and carry about their business, including the professor getting his nipples tweaked by one of his students. No, really -- the professor dons part of a purple negligee and proceeds to get his nipples tweaked with a pair of pliers. There is absolutely no reason for this scene to be included, but it’s hilarious. It’s almost as absurd as the borderline porn fantasy in the Star Wars Holiday Special that happens to Chewbacca's father.

Since this is a Jason film, there are deaths galore. It seems as though the filmmakers threw darts on a board with random ways one could die, and then stuffed as many as they could into the movie. Two deaths in particular shine in the film. The first features Jason seizing one of the students, stuffing her face into a bucket of liquid nitrogen, and then smashing it into a counter (according to “Mythbusters”, this isn’t actually possible, but it’s still amazing):

The second death takes place while Jason is led into a virtual reality where a pair of topless girls urge him to have premarital sex with him (again, this actually happens). He proceeds to murder them by putting one in a sleeping bag and beating the other one to death with it. It’s easily one of the greatest deaths ever to be put on film:

Whether or not Jason X is meant to be a comedy will forever remain a bit of a mystery, but that’s beside the point. Jason X is the ideal horror movie guilty pleasure, as it has all of the elements needed for a successful B-rated horror film: cringeworthy acting, implausible deaths, gratuitous nudity, and a nonsensical plot. It is all of these elements that make Jason X so brilliant, and the perfect film to watch with your friends this Halloween.