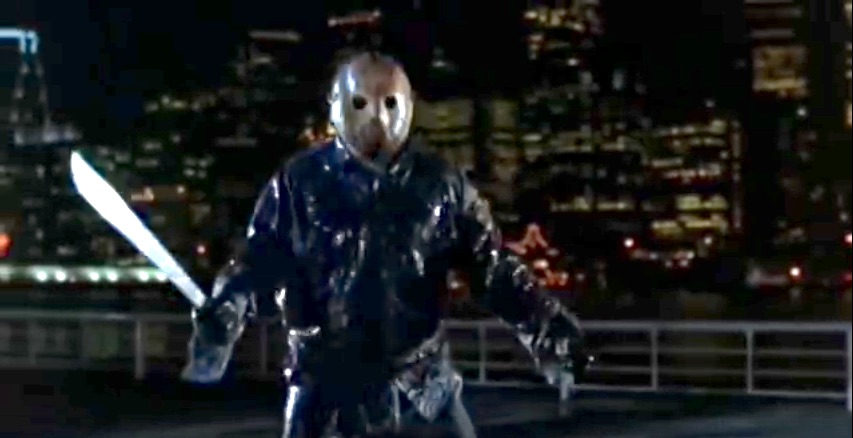 Friday the 13th Part VIII: Jason Takes Manhattan certainly falls into the vein of “so bad it’s good” films. I have not laughed at a film this hard for quite some time. I love the fact that the title is completely misleading -- the majority of the film actually takes place on a cruise ship, and Jason only takes on about four people in all of Manhattan. I also adore the wonderfully cheesy '80s effects and the classic '80s slang (I counted at least one instance each of “dweeb” and “spazz”). And I love the stereotypical stern principal who just doesn’t get it, and the teenagers who just want to have a good time, man!

The film opens with a nonsensical monologue about the dangers of New York City, in which we witness a rat fall into a tub of green goo. I presume that the rat goes on to become Splinter from Teenage Mutant Ninja Turtles since he is never seen again, and I was very disappointed that the Turtles did not show up to take on Jason (new crossover, get on it, Hollywood!). We then shift to two teenagers having sexy times on a boat, where they drop an anchor (no, an ACTUAL anchor; mind out of the gutter, kids) that triggers an underwater electric cable that electrifies Jason (Kane Hodder) and brings him back to life, Frankenstein-style. The cheesy animation that jerks Jason to life gave ME life too.

After Jason awakes, he kills both the teenagers (naturally) and sets out to find some more to satisfy his bloodlust. The film shifts to a group of people for whom no explanation is given for a good 10 minutes, other than the fact that one has a cute dog. We then learn that it’s a graduating class of seniors who are taking a cruise to Manhattan for their senior trip. It’s never explained where exactly they are coming from, nor why it wouldn’t simply be easier to fly, nor why the ship looks like the Titanic’s non-union equivalent. We then meet our two heroes: Rennie (Jensen Daggett), cute dog owner, terrified of the water, and has a stern uncle who is also the principal; and Sean (Scott Reeves), the ship captain’s son who happens to know nothing about sailing. We can only assume that these two will survive since they don’t have sex nor do drugs.

The film then follows Jason as he kills various teenagers. In Jason’s mind, the teenagers deserve it as they proceed to wreak havoc on the boat. They shoot off a shotgun (which strangely doesn’t bother the principal, but it does bother the one student not completing her Biology project) as well as proceed to have a boxing match for no apparent reason. Jason slaughters a Joan Jett wannabe with her own pink guitar. This was my favorite death as I didn’t know you could kill people with guitars. He then murders one of the boxers with a hot stone as he relaxes in a sauna that magically appears out of nowhere (I wish I had one of those). Both deaths are not even remotely frightening and are just delightfully goofy.

Sadly, my favorite character is shortly killed after this. She is a coke-snorting, bleach-blonde mean girl whom we know is mean because she throws Rennie off the boat because she thinks she’s a “snitch”. Mean Girl then decides to get back at the stern principal by showing him her “biology” project -- which involves herself in black lingerie and a heavy makeout session with him (ew). I was stunned that the principal had no problem making out with one of his students, but that he was upset that she still hadn’t technically turned in a biology project (this is why for some teacher's tenure is a problem). It’s really a shame when Jason takes her out with pieces of a broken mirror (ooh how thematic!), because she’s really quite fun. She throws people off boats, does a ton of drugs, and shamelessly seduces her teachers. I would have liked to have seen what kind of mischief she would get up to once they reached New York.

After Jason kills the entire crew and a few more teenagers, Sean, by some miracle because he doesn’t know how to sail, manages to gather a few survivors and they row their way to Manhattan. The film really turns insane as Jason somehow morphs himself into a fish and swims on over to Manhattan. Instead of taking on all the radioactive rats, Jason heads straight for our heroes, proceeding to kill a few gang members along the way. I won’t give away the ending, but let’s just say that the cheesy special effects make a wondrous comeback.

The senseless violence of Friday the 13th Part VIII: Jason Takes Manhattan was truly breathtaking. This is the perfect film to play at your Halloween party. It won’t actually scare any of your friends, but you’ll have a great time laughing at it and attempting to predict all the crazy deaths. It’s completely ludicrous, and therefore, the ideal guilty pleasure.

To inspire you to watch Friday the 13th Part VIII: Jason Takes Manhattan even more, here is a clip of another great death. Jason literally punches someone’s head off. Enjoy! (NSFW):