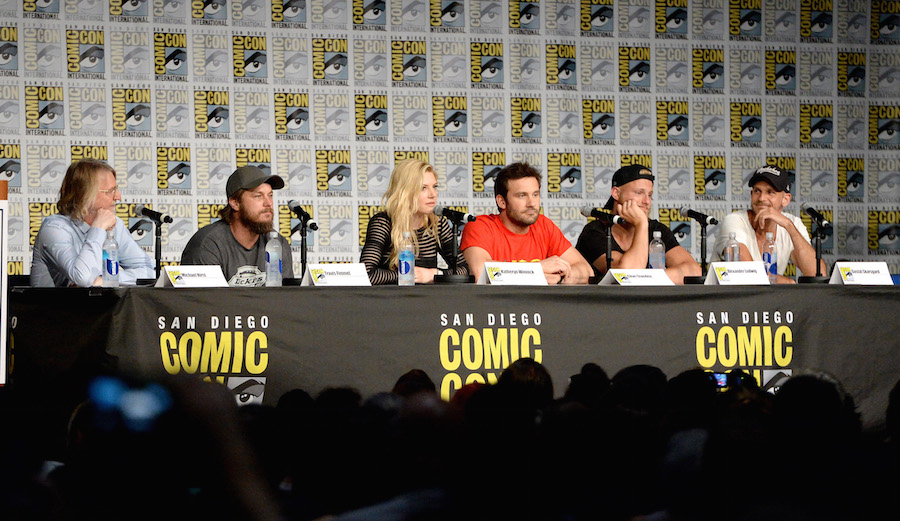 Currently trending on Twitter is #ComicConin5Words. For me, those 5 words would be "weirdest weekend of my life".

And there are still two more days to go.

Nevertheless, it's been a wild ride so far. The convention is now in full swing, with some of the biggest panels, announcements, and reveals starting today (Friday). Let's jump right into the fray, shall we?

At "The Walking Dead" panel, the subject on everyone's mind was the same one that's been there since the Season 6 finale -- who the hell got Lucille'd by Negan?? Thus was the theme behind the Season 7 trailer they debuted, which was pretty much just a series-long retrospective of the various contenders for the business end of Negan's nasty bat. Stay tuned for my report from the TWD press conference, coming soon!

Meanwhile, I was in Ballroom 20 for the Man Candy Brave New Warriors panel, which was basically just a collection of extremely good-looking (and talented) TV actors, including Josh Holloway, Dominic Cooper, Theo Rossi, Eric Dane, Corey Hawkins, Dominic Purcell, and my boo Clive Standen. Moderated by Entertainment Weekly's Lynette Rice, the dapper gents were subjected to a series of deliciously objectifying questions... Okay, not exactly, but some of the discussion topics included each actor's most embarassing early roles and their biggest childhood crushes (wherein Clive revealed that his wife is madly in love with co-panelists Dane and Holloway, "So I dunno whether I should fight them or start a threesome!"). Questions from the audience were almost exclusively aimed at Dominic Cooper... though it's little wonder. The man is freakishly charming. 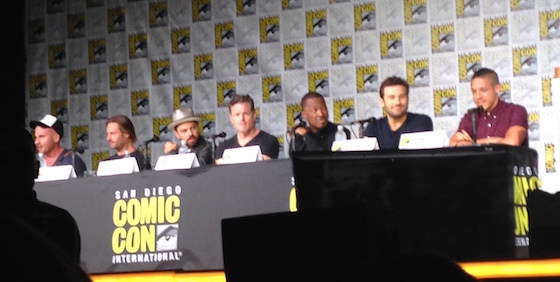 It all looks so good, I dunno where to start!

I was glad I was able to catch that panel since I was not able to attend the "Vikings" panel, where the first trailer for the second-half of Season 4 of the History Channel series debuted, showing a significant time jump (lots of gray hair and long beards!) and seemingly focused more on the exploits of Ragnar's heroic sons.

"Bates Motel", which is headed into its 5th and final season, dropped the bombshell that they will be introducing Marion Crane next season. For those unfamiliar, Marion Crane is the woman who gets hacked up in the shower in Psycho, the movie upon which the A&E series is based. In a bold move, playing Marion will be none other than Rihanna! All that and more in my upcoming recap of the "Bates Motel" roundtable interviews with Freddie Highmore, Vera Farmiga, Max Thieriot, and Nestor Carbonell, and creators/executive producers Carlton Cuse and Kerry Ehrin!

"American Gods", the much-anticipated adaptation of Neil Gaiman's award-winning novel, finally gave fans something to chew on with its first trailer and also the introduction of Kristin Chenoweth as Easter, the goddess of Spring.

So, some pretty thrilling and exciting things afoot all around! Can't wait to see what Day 3 brings!

(Photo via Getty Images for HISTORY)