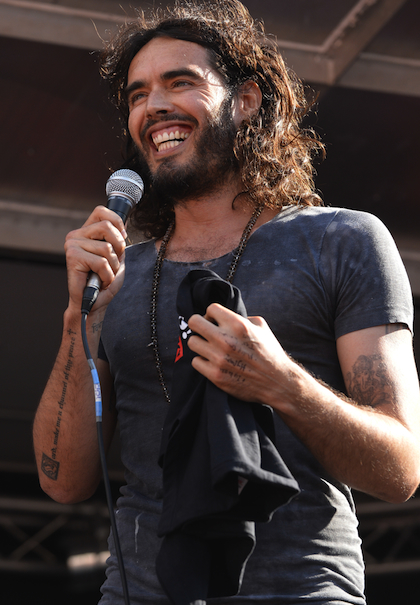 If there is one thing 39-year old actor-comedian Russell Brand is known for, it is surprises. He has surprised us before by hopping into politics and arguing with the Scottish government, so what more can this guy do to really wow us? Well, how about announcing his upcoming rap album? No, this is not one of the funnyman’s outrageous gags; he really is making a rap album.

Brand has done the music thing before as the ldad singer of the fictional band Infant Sorrow, but now wants to do it for real. This time, however, he plans on releasing an album of spoken-word rap based off his book of poetry, rEVOlution, due out in October. The album is said to be compiled of love poems and things he learned from past relationships.

Brand is creating the records with the help of famous producer and "La La La" hit-maker, Naughty Boy. This collaboration is taking place partly because Russell’s girlfriend happens to be friends with the producer. Still, with Naughty Boy signing on to the project, it should be pretty good, right?

Despite using a big-name producer, though, this little project is just all fun for Russell and there are no official chart singles according to Sun on Sunday. Does this all sound too ridiculous to be true? See for yourself when the album releases and stop back here for a track-by-track review!