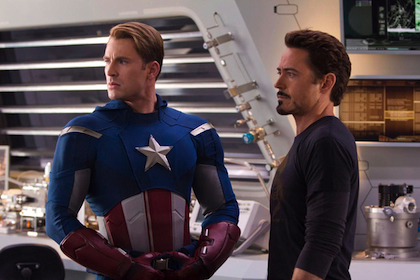 For those of y’all who were disappointed to find out that Iron Man 4 is not happening after all, don’t fret, cuz you’ll be getting your Tony Stark fix anyway!

Turns out, the plot for the next Captain America flick (that’s #3, in case you’ve lost count) will reportedly revolve around Marvel’s popular “Civil War” storyline, which you may or may not be able to get the idea about from the title alone. Basically, the plotline revolves around a Superhero Registration Act, which requires all superheroes to not only register with the U.S. government but to also work on their behalf. Surprising, CAPTAIN AMERICA is against this, and corporation-friendly Tony Stark is for it, setting up Iron Man as the villain in this scenario.

According to reports, Robert Downey, Jr. was initially reluctant to participate in this film, but after some swift haggling, all is well and it’s a go. Which is a good thing, because this next Captain America movie supposedly sets up the sequence of events for the next 100 or so Marvel universe movies. Butterfly Effect, people!

In the meantime, the comic book teasers for this storyline suggest that Spider-Man will be at the center of the “Civil War”, which begs the question – will Spidey FINALLY be making an appearance in an Avengers movie? Well, possibly, but don’t expect Andrew Garfield to be under the mask, cuz apparently legal stuff.

Captain America 3 is expected in theatres in 2016.

In the meantime, check out both RDJ, Chris Evans, and more Avengers making our own Nikki Novak swoon at this year's Comic-Con!