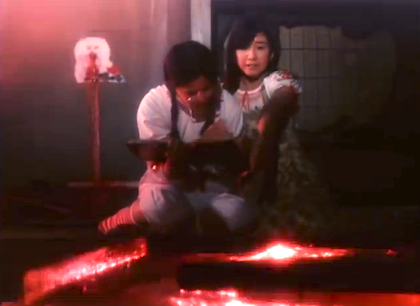 Cheap sets, a main character named Gorgeous, and a musical score that rivals the '90s sitcom “Step by Step”... sounds like another edition of Hidden on Streaming! This week, I watched the 1977 Japanese horror film House (or Hausu), not the television show about the drug addict doctor. Although I do dig that show. You can watch House (1977) now instantly (with commercials) on your Hulu Plus account.

House follows the adventures of several Japanese school girls named Gorgeous (the pretty one), Fantasy (the day dreamer), Kung Fu (the martial arts expert), Prof (the smart one), Melody (the musically talented one), Sweet (the nice one), and Mac (the constantly hungry one) as they visit Gorgeous’s aunt’s house (her mother’s sister) for Summer break. Gorgeous is obviously the instigator in the whole getaway, and she wants to use her aunt’s house as an excuse to escape a trip with her father and future stepmother. Gorgegous isn’t happy with the idea that her rich and famous movie music-composing father is in a deep romantic relationship with an actress, whose hair and scarves always manage to blow in the wind, no matter where she is. Disaster ensues for Gorgeous and the rest of the girls as they realize, one by one, they are being picked off in classic haunted house horror movie fashion.

House adds humor by being experimental. The sets mostly look like something out of an American '90s sitcom (which I guess can be considered ahead of its time?). The edits are disorienting, which can add humor, or, like “American Horror Story”, add a feeling of “something isn’t right here”. On top of that, there are scenes that make you think, “What the hell am I watching?”, but in a good way that makes you crack up. There’s a '90s sitcom musical interlude, which ends in a major supporting character getting their butt stuck in a bucket. (What an ass!) There’s also severed fingers that play a piano. The whole movie is mainly set up with things that just seem so random that they actually work and bring plenty of humor. In fact, when I was watching the movie, I am not quite sure that director Nobuhiko Ôbayashi actually set out to direct a horror movie. Instead, I feel that Ôbayashi just wanted to make something experimental and psychedelic to mess with everybody’s heads. Whether he wanted it to be funny of not, I have no idea, but it certainly made me laugh out loud.

Despite my feelings that this isn’t a straight-up horror film, it does follow the classic "Scooby Doo" horror movie tropes:

1. The weird guy you meet on the road isn’t directly involved with the big bad.

2. Somebody can’t see without their glasses.

3. There’s a rich widow living in a house all on her own just waiting for some criminal to embezzle all of her money.

4. You’ve got a gang of misguided teens going into a place that screams “bad things happen here!”

5. The bad guy/girl is pretty obvious.

The only things they’re missing is a dog and weed. Mac eats snacks through out the whole film, so Scooby snacks are probably present. Luckily, unlike too many episodes of "Scooby Doo" that have bummed me out, the bad guy isn’t somebody we’ve never seen on screen.

But that’s it for you. Upload House on your Hulu Plus account today! If you don’t have one, get one! If you don’t want to get one, go on Amazon and rent it for $3.99 in HD or $2.99 in SD. I recommend SD because it’s from 1977. I would also recommend gathering your like-minded friends and screening it at your Halloween party. Seeing it with some kind of crowd will no doubt add humor. Until your House party, take a look at the trailer. It’s really captures a lot of the enjoyable ridiculousness of House and includes scenes not in the finished film: