Ricky Gervais to Revisit His Musical Past in ABC's "Galavant"! 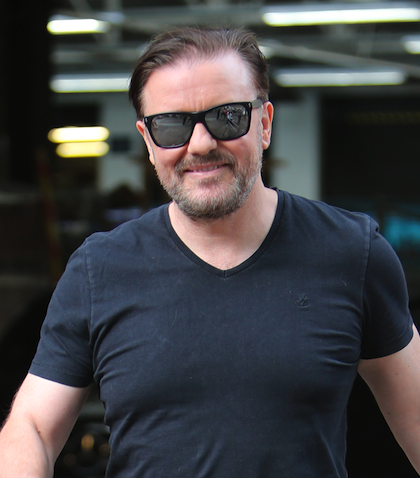 If a shark stops swimming, it will die, and if Ricky Gervais does not appear on television every few months, he may very well meet the same fate. To the end, the British comedian has decided to guest star on ABC’s upcoming musical fairytale, “Galavant”. Scheduled to air during “Once Upon a Time”'s hiatus, “Galavant” features original songs set in a fantasy world of princes, princesses, knights, sorcerers, magic, monsters, and every other mythical creature they feel like throwing in there. The show follows the story of a hero played by Joshua Sasse, whose true love was stolen away from him.

Gervais will play Xanax, a well-known wizard who has the best potions in the land (get it?). ABC has clarified for us, once and for all, that the show is indeed a comedy.

As for Gervais, we know he has the comedic chops, you may very well be wondering if he has the talent to pull of the show's musical numbers. Well, fear not, because he definitely has some experience going for him. You see, for a brief period during the magical time known as the 1980s, Gervais was in a glam-pop band called Seona Dancing. Don't believe me? Lucky for us, a wonderful soul on YouTube has made a video montage of Gervais in Seona Dancing, and it’s amazing:

I love that he looks like Ed Wood. I also can’t get over how skinny Gervais was. I just want to feed him a sandwich.

Will you tune in to “Galavant” to see Gervais sing?