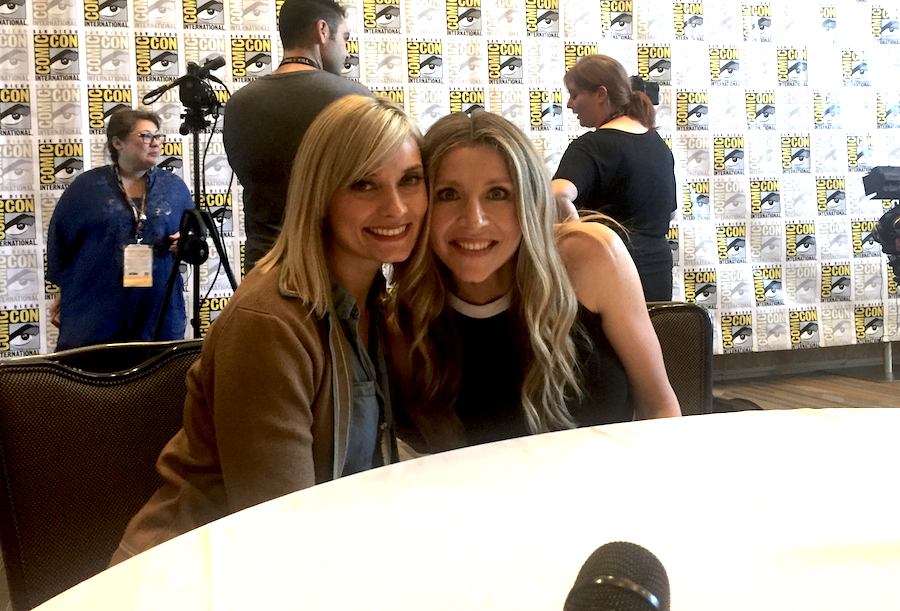 It’s time to get schwifty! Season three of “Rick and Morty” will premiere July 30 at 11:30pm on Adult Swim, and while we’re not yet sure if we’ll see Episode 2 or simply a repeat of the first episode, which aired on April Fool’s Day, we do know that Season 3 promises 10 episodes, lots of guest stars, and quite possibly more Schezwan Sauce. Check out the Season 3 trailer below:

During Comic-Con, I got the chance to chat with the cast about Season 3, the extent to which Justin Roiland went to get some Schezuan Sauce, and who their characters would cosplay as!

YH: Are you excited for the third season to come out?

Justin Roiland (Creator, voice of Rick and Morty): We’re super excited. We’re in that interesting spot where we’re about to premiere, but we’re still posting, so the amount of time we have to lock episodes is going to get shorter and shorter. It’s really exciting that it’s finally going to be out in the world. I think it’s a pretty dang good season.

YH: What happens in Season 3?

Spencer Grammer (voice of Summer): A lot of things happen in Season 3. Family dynamics change. It’s much darker from Morty’s perspective. There’s also a little beastiality for one second. The fans wanted it apparently.

Sarah Chalke (voice of Beth): We gotta give the fans what they want.

SG: There’s a little incest. We’ve done that already, though, and we keep it classy. We gotta push the boundaries with a little “Game of Thrones”.

SC: It’s a fun season for Beth. We get to dive in and see a bit of her childhood. We see more of her relationship with Rick. The cool thing about Season 3 is that there are a lot of pairings we haven’t seen before. We’ll explore relationships that haven’t been explored yet. 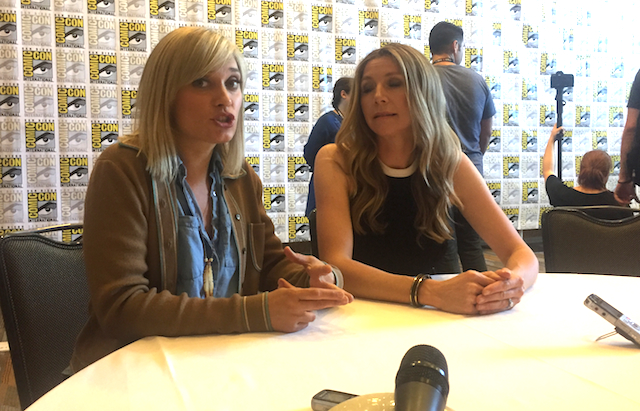 YH: Do you only receive your lines, or do you receive the whole script?

SC: We get the whole script. It’s a very exciting day when a “Rick and Morty” script arrives in your inbox.

SG: Sometimes you won’t get it until about an hour before you record [laughs]. There’s those days, where you’re like, what is going on? And you just have to say a bunch of lines.

SC: When you’re reading it, you read about the Galactic Federation coming in, or a testicle-headed monster, or a cloud fart, or a Meeseeks box, and you can’t imagine in your mind what the end product will be, because it looks so different. It’s so exciting for us to see the episodes.

YH: Those are all normal words you just said.

SC: Meeseeks. Butthole. It’s one of the funnest parts of the show. The scripts are super detailed, but what you imagine is often different from what’s actually animated. It’s so fun to see it come to life! I’m such a geek for animation, probably because I can’t draw. But the art in Season 3 is insane.

SC: I am. I am a horse heart surgeon. Let’s go with that alliteration!

SG: Did you actually do research on that?

SC: I could only do it on a goat. But apparently it’s similar enough.

YH: Do you have a favorite line from the show?

SG: I always say “Keep Summer safe.” I always love the things that I do, because I’m an actress. I love the DMX thing where, in Season 1, when Rick and Summer go and beat up the devil. But I also loved Chris Parnell’s whole thing where he lives the whole life he always dreamed of. It’s the Meeseeks episode. I’m not even in that episode, but his performance in that is the best!

SC: His line reads are crazy. I wish he could be here. One of my favorite lines is when we are at the squanch wedding, and I’m yelling at him to not mess this up because it’s the one time I’m getting to know my dad’s world, and I tell him to go stand by the wall and not talk to anyone, and he says, “Well, maybe I just will.” He’s brilliant.

YH: Have you guys seen anyone dressed like you at Comic-Con yet?

SG: I haven’t seen any Summers yet. I just got here this morning. But I’m sure there will be some Summer somewhere. People always tag me on Instagram, and I think it’s amazing. People sometimes meet me and tell me I look like Summer, and she’s really hot. I just think, thank you! It’s so nice!

SC: Unlike me. I got a tweet that read “Sarah Chalke finally found the best medium for her looks. #Animation”. I haven’t seen any Beths yet. I did see one last year. We’ve seen a lot of Ricks and Mr. Meeseeks.

SG: They’re probably the most fun to dress up as.

YH: If your characters came to Comic-Con, who would they cosplay as?

SC: I think Beth would come as Bird Person. I don’t know if that counts, since it’s a show-within-a-show. I’m just saying that because it’s what I would want to come as.

YH: Were you surprised at how popular the whole Szechuan Sauce thing became?

Ryan Ridley (writer): Me too. [laughs]

Dan Harmon (creator): Some people have legitimately been craving it for the last 20 years.

JR: I had heard that they had a limited batch at the Winter Olympics in Canada. I called every McDonald’s in L.A., and they didn’t know what I was talking about. I went on eBay to see if anyone was selling it, but no. I might have gone as far as to connect with people in Canada and see if they could get some and mail it to me, but that failed. I didn’t have the reach that I do now. I didn’t know anyone. I was a hermit. I still am, kind of. I have a bit of social anxiety. But that was one example of me thinking about the sauce, doing whatever I could to taste it again, and then these guys have been hearing me talk about it for years. That kind of stuff finds its way into the show sometimes. It’s kind of making fun of me.

DH: But you are getting a bottle, right?

JR: Yes! McDonald’s is sending me a jug of it. I’m going to make sure we are filming it. I want to see their reactions. [points at RR and DH]

RR: I think it’s adorable because Rick is such a brilliant asshole who knows everything, that it’s nice to see him genuinely passionate about the mundane things he’s passionate about. That’s what makes it work, right?

JR: We have gotten the logical question of “if Rick can create a cognition amphilpher in two seconds that can turn a dog sentient, then why he couldn’t just make the sauce?” And the answer to that is that you can’t make the sauce! It’s impossible! It needs to come in a little cup!

RR: Here’s a little trivia. Last season, the episode with the microverse, where they go into the different worlds, that was originally conceived as Rick having this whole civilization in his lap -- with planets and universes -- and that he would liquify it down into the Schezuan Sauce. That was going to be the only way you could make the Schezuan Sauce, was by liquefying a civilization.

JR: We were going to do that?! That’s insane!

RR: Yep! So the Schezuan Sauce got separated from that and made its way into Episode 301. 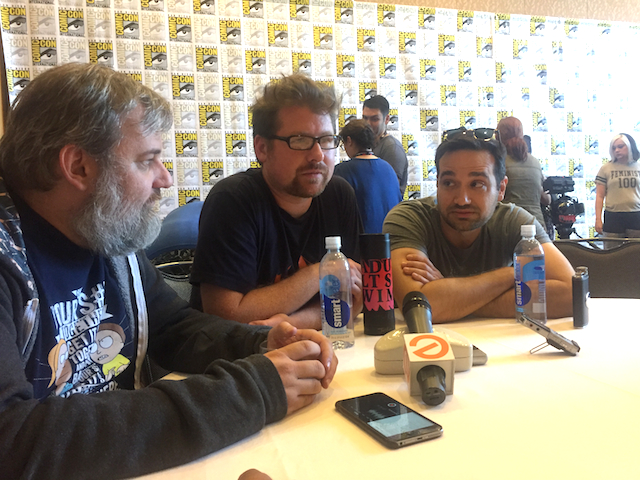 YH: Who is harder to voice, Rick or Morty?

JR: Morty. I run into a problem where I can sort of lose the Morty voice. If my voice is hoarse or I’ve been out drinking at loud bars, which I don’t do a lot -- I actually avoid it -- then the Morty voice is rough. If I do a ton of Rick screaming, then that will eat into the Morty voice. Even today, it’s been a little rough. It was rough this morning. But Rick’s easy. I can do Rick anytime because it’s just gruff. My voice could be shredded and I could still do Rick.

YH: Were their voices inspired by anyone?

JR: Oh yeah. Doc Brown and Marty McFly [from Back to the Future]. It’s just a really shitty version.

DH: Not from a legal standpoint. [RR and JR laugh]

YH: In a parallel universe, are you guys at Comic-Con right now and what are you doing?

JR: We are. I’m on the floor, in line, waiting for whatever LEGO exclusive they’ve got this year.

DH: This is the place where I get something I desperately need. I love coming here. I’ve been coming here since the days when I was selling comic books, and hoping people would buy them. I’ve watched over the ages as Comic-Con went from a place where fat nerds would sit on the floor and look at what they’ve brought to the time now where Bruce Willis’s publicist will caddle-prod you for sitting on the floor, and I’m the Bruce Willis, if I may say so myself. This is like my Christmas. I don’t really care that much about Christmas. I like coming to the place where publicists walk me around and drive me in SUVs and have a bunch of people ask me, “What’s it like to write brilliantly?” That doesn’t happen at Cannes. I’m a very specific, very targeted creator.