RECASTING THE CLASSICS: 'The Exorcist' 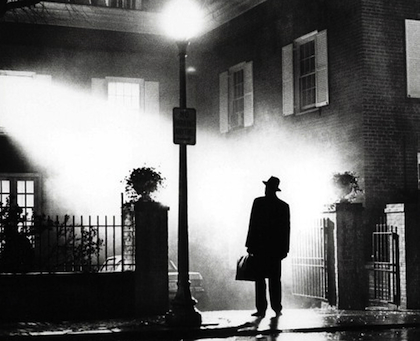 In 1973, The Exorcist was unleashed upon the world in all of it’s pea soup-soaked glory. According to many, including myself, it remains the scariest American horror film ever made. Oh sure, Apollo 18 comes pretty close to claiming that title as well, but The Exorcist edges it out just slightly.

The Exorcist tells the harrowing tale of a poor crucifix that is minding its own business when suddenly it embarks on a journey that few other crucifixes have undertaken before. Well, actually only a tiny portion of that is true. The movie actually centers on 10-year-old Regan MacNeil (Linda Blair) and her mother, Chris (Ellen Burstyn), who is a successful Hollywood actress. When Regan is inexplicably possessed by a demon, Mrs. MacNeil seeks out help from everybody, ranging from medical doctors to psychiatrists, in order to cure her daughter of her bed-shaking ways. When all else fails, Chris returns to the faith that she once abandoned and begs the Catholic Church to send an exorcist so that her daughter might finally be free from the demon’s clutches. And if you don’t believe me, I have included a trailer below that will back up at least 95% of what I just said.

Recasting classic movies has never been an easy thing, and this go-around proves to be no less difficult. Like many of the other movies I have tackled, this one features some of the most iconic film characters in the history of the medium. But, fortune favors the bold and I have selected, what I think, is the best group of actors and actresses to properly bring these roles back to life.

Chris MacNeil is a woman who has done her best to juggle her career as an actress with the responsibilities of motherhood. She is a kind woman with a wonderful inner strength that allows her to move forward in her journey to try to help her daughter. But surely anyone going through what Chris is going through would come close to a breaking point, and as such her character is very well-rounded because the strength she displays is balanced out by some absolutely heartbreaking fragility. So why did I cast the actress known mostly for her role as Agent Scully on "The X-Files"? Well, aside from the fact that both characters start their respective journeys with a certain sense of skepticism, I feel that Gillian Anderson has proven time and again that she is able to walk that fine line between soul-crushing sadness and firm resolve. Check out her roles The House of Mirth and Bleak House and you’ll see that she is more than capable of doing honor to the role of Chris MacNeil.

Father Merrin is an old and weathered priest who had already done battle with the forces of darkness prior to the events of this movie. He knows that if he faces the demon again, that he might very well die, but he will do so anyway in order to save the soul of an innocent. I admit this might be a lazy piece of casting on my part, but can you really blame me? You don’t need me to tell you about the commanding presence that Liam Neeson has shown in the better part of his filmography. If you take that authoritative personality and couple it with his uncanny ability to look really tired while demonstrating great compassion, then you’ll find that you have the perfect casting choice for Father Merrin.

Father Karras has been a member of the priesthood for quite a while and his faith is slowly starting to be chipped away. He is not only a priest but a psychiatrist too, and that means he must live in a world of rationality in order to better serve his patients. But the world of religion demands that one sometimes abandon what is seemingly rational in order to take the leaps of faith. Certainly there are many actors who could have taken on this role, but I ultimately kept coming back to John Cusack. Check him out in "1408" and you’ll see that he is quite capable of playing a man who is forced to confront his own skepticism and beliefs in the face of a supernatural conflict.

The character of Regan is not the most fleshed out character in film history. She merely exists in this movie to be the face of innocence, and the horror of the movie comes from seeing this innocent child torn down and degraded into the awful creature that drives the events of this film. A few years from now, Elle Fanning might be a little to old for this role, but as of right now, I still think she could pull it off. She is a capable young actress with a soulful and angelic sort of look about her that would break the hearts of audiences around the world if they were to witness her fall form grace. Seriously, my head is spinning from thinking about all of the awesomeness that she could potentially bring to this role...