Eminem: From Shady to Mathers and Back Again 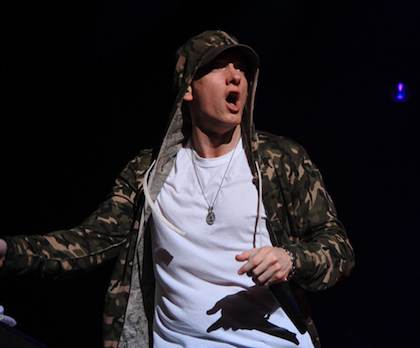 Eminem is kicking it old school!

Earlier this summer, we first got word that a new album from Eminem would be imminent, and then during the VMAs on Sunday, Em announced that his forthcoming 8th studio album would be titled The Marshall Mathers LP 2 and would drop on November 5. Two days later, he released the first single off the album, “Berzerk”. Take a listen below! (NSFW language)

My first thought upon hearing this was, “Wow, this kinda sounds like the Beastie Boys”, followed by, “Holy crap, is that a sample of Billy Squier’s ‘The Stroke’??” Accurate on both counts, but what really struck me is that Em seems to be not only reaching back into music’s past in general but his own past in particular. This sounds way more like the irreverent, tongue-in-cheek Eminem that we were first introduced to. Which makes the title of this new album so relevant – it seems like the rapper is finally getting back into the groove that first made him such a smash.

Not that his last few records haven’t been phenomenal. On the contrary – Relapse and Recovery were both mind-blowing, but they weren’t exactly rainbows and butterflies. Not that The Marshall Mathers LP was either, but the significance of that record is that it bridged the gap between the sort of caricature Eminem seemed to create for himself on The Slim Shady LP with the more serious-minded and introspective artist that he eventually became. And if The Marshall Mathers LP 2 is intended to be a direct sequel to that, then I think we’re in for some great stuff. “Berzerk” seems to be indicative of this, the type of “party anthem” you would expect from a rapper who’s all grown up now and has seen and been through some ish. And the inclusion of “The Stroke” fits Eminem’s brand of humor perfectly.

What do you think of the song? Are you looking forward to The Marshall Mathers LP 2?